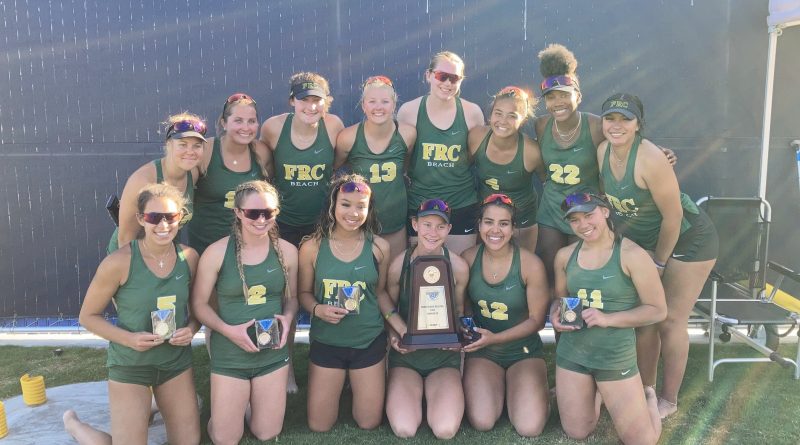 The Feather River College beach volleyball team poses with their trophy following their second-place finish in the state championship May 12. It all came down to 2 points in OT. Photo submitted
News Sports
May 13, 2022May 18, 2022 Editor

The Feather River College beach volleyball team captured the state CCCAA runner-up trophy May 12 in a nail-biting finish.  The team entered the playoffs seeded second in NorCal and beat the number one Southern California seed to reach the championship game.

During the morning’s competition, the FRC Golden Eagles beat San Diego Mesa College, then the team upset the South’s #1 seed Orange Coast College. That set up the CCCAA championship game vs. Irvine Valley College. In the best of 5 series, FRC lost 3-2 in team games.  The score was tied 2-2 for team games with the fifth game going three sets – first team to earn 15 points wins the championship – and IVC bested the Golden Eagles 16-14 in extra points. Just two overtime points separated the two teams.

“The student-athletes and coaches Sarah and Tara have much to be proud of, and our college supports their accomplishments,” said FRC President Kevin Trutna, in announcing the win.