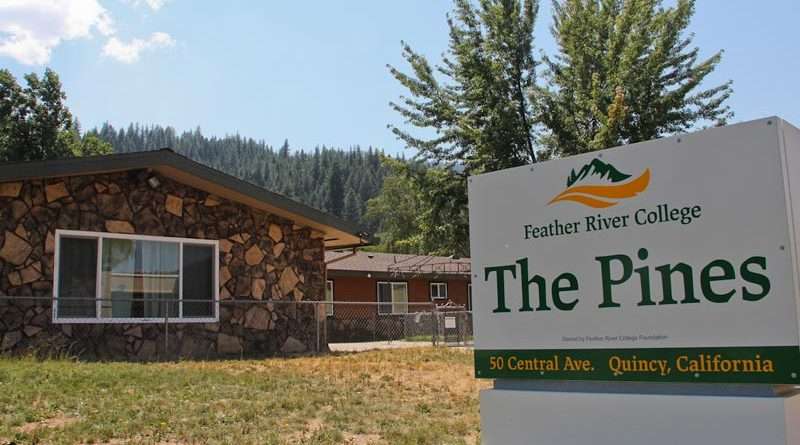 The FRC residential facility at The Pines in Quincy is one of three locations providing student housing in Plumas County’s critically strapped housing market. Trustees and administrators grapple with the shortage and its impacts upon the college. Photo by Roni Java
News
June 26, 2019June 30, 2019 Roni Java, Staff Writer

A critical lack of housing that impacts students currently attending Feather River College  and many who want to enroll came up at the end of the June 20 meeting of the FRC Board of Trustees in Quincy.

“Our enrollment is up this year, compared to last year, in both on-campus (and online) students and the ISP, incarcerated students program,” the college president said.

Trustee Guy McNett responded to the update, which is positive news for the school, saying, “I’m going to get on my ‘housing-horse’ here because we’ve been kicking this can for a long time and I’ll ask the question: Where are the students going to sleep? What is our response to the housing crisis in this county?”

Administrative staffers replied that the shortage of housing for FRC students on campus, in campus-sponsored housing and throughout the local communities is indeed an issue.

Carlie McCarthy, chief of Student Services, acknowledged that the housing manager for the FRC dorms on site has to turn people away and students are encouraged to sign up for the spring semester if fall doesn’t work out because there is usually more housing available during the second half of the year.

“We are still recruiting in our athletics programs and for the agricultural majors,” she said. “But it’s a difficult position to be in. If we had 50 more beds, we’d have students to fill them.”

“But there’s NOWHERE for them to live,” Reid said. “It’s making our planning situation really difficult. We may have full classes, but we don’t know if we will or not.”

McNett followed up with additional comments.

“Do we lose 50 to 70 students each year because of this?” the trustee said. “People tell me all the time, this is a big issue. One man told me his son works at the Sierra Pacific Industries mill and has to commute all the way from Chester because he can’t find any place to rent any closer. I’m just tossing this out. We’ve done what we could by creating the dorms, the Meadows and the Pines for student housing. But we’ve got to do more.”

Trutna explained the college is aware of the problem and acting on it, though solutions are few right now.

For instance, FRC is converting some dorm rooms to triples by adding a third bed, but he said students have to agree to be assigned to triple-roommate rooms.

He said they know that students are signing up and enrolling online, getting all the way to the shopping cart for payment, but being lost to FRC when no housing is available.

“There’s also a serious situation in the community where houses are being sold and students are being told to move out, but there’s nowhere for them to go, nothing else they can rent,” Trutna said.

Trustee Trent Saxton asked if there is any other committee or group trying to address student housing besides the FRC Foundation. Trutna noted there is a housing committee that meets every week, and the first thing the members will say is FRC needs more student housing — or help making it happen.

McCarthy explained that the housing committee addresses various issues related to student housing, including roommate issues (but the committee doesn’t have a solution to the greater problem either).

The board members acknowledged the need and the frustration the issue causes, both at the college and throughout the county at large.

Trustee Bill Elliott said funding and getting a developer involved is an issue.

“We’d have to be the developer,” said Trustee John Sheehan. “We need to look at it more seriously. Perhaps we could use some funds to do the architectural fees, etc. It has to be us. No one else will do it for us.”

On a related matter, FRC President Trutna said he testified on state funding for the college during hearings held June 19 in the capitol. While he was there, a bill came up in a committee hearing and he was concerned because it was approved to move forward to the state legislature for a vote and had strong support.

The bill, AB 302, would mandate that community colleges allow enrolled students who are homeless to sleep in campus parking lots overnight, he said.

Current law already requires a community college with shower facilities for student use to grant access to those facilities to any homeless student who is enrolled in coursework, has paid enrollment fees, and is in good standing.

FRC’s homeless students do receive this service and use the facilities without problems, administrators said at the meeting.

AB 302 would require community colleges with parking facilities on campus to grant overnight access to those facilities on or before July 1, 2020 to any homeless student who meets the same criteria currently required for access to the showers, etc. The bill indicates the purpose is to allow sleeping in the student’s vehicle overnight.

By imposing additional duties on community college districts, this bill would impose a state-mandated local program.

Trutna appeared troubled. He told the board of trustees he testified against the mandate because if it passes, it would affect FRC even with its severe winter conditions.

“It passed out of the committee unanimously,” the college president said, expressing concern about student safety in Plumas County, which lacks the temperate climate of many other community college locations in California.

“It will basically allow homeless community college students enrolled in one half a unit or more to live in the parking lot,” he said. “So what will be our liability, security needs and our ability to provide access to those basic necessities?”

He further explained that the proposed legislation does contain some opt-out provisions if a college does not or cannot comply:

California State Assemblyman Marc Berman, D-Palo Alto, authored the bill after holding informational hearings in 2017 and 2018 at which students shared stories of their homelessness and housing issues that prevented them from completing their degrees.