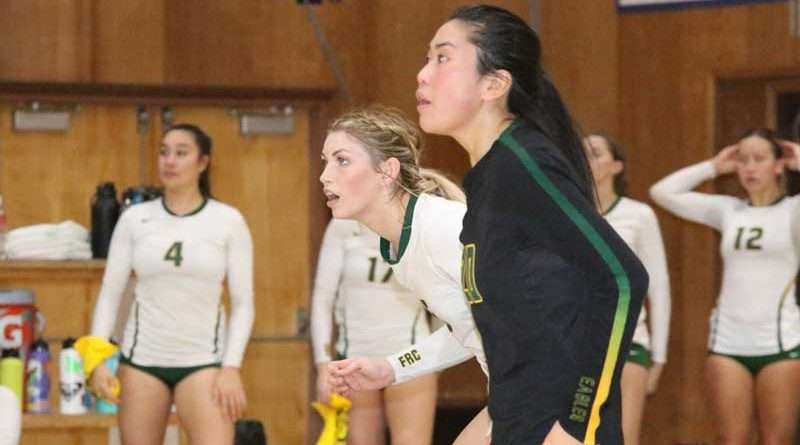 Eagles on and off the court await the outcome of a dynamic shot.
Sports
December 1, 2017November 30, 2017 Mari Erin Roth, Sports Editor

The Feather River College Eagles have moved through rounds one and two of the Northern California playoffs. The team is proving to be one of the top four teams in the state.

“We have an incredibly hard working group of individuals on the team,” said FRC head volleyball coach Sarah Ritchie, “and we are incredibly excited to make a run for the state championship.”

Feather River College played a pair of crowd-pleasing matches on their home court Nov. 21 and 25 to earn their spot in the state championship bracket.

The Eagles first played against Hartnell and won 3-1 on Nov. 21. The sets featured some thrilling rallies that extended into the “super-skill” range. The crowd rose to their feet after some of the rallies. Diving saves and power kills peppered the match from both sides to the delight of the fans.

Cyan Blackdeer had 18 kills against Hartnell, Michaela Ahienslager, 15, and Madison Howard delivered 11. Aces for the Eagles were served by Katie McKay with two and Blackdeer and Ahienslager each with one.

In the championship finals at Solano College, the women will face teams from all over the California.