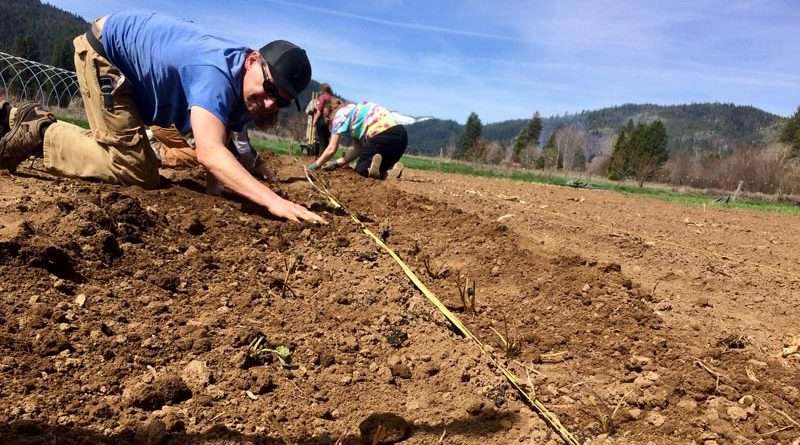 Gregory Hald makes sure everything is just right as students with the Ecological Farming Certification program at Feather River College work in one of their various fields. Photo by Jessie Mazar
News
May 19, 2019May 16, 2019 Victoria Metcalf, Assistant Editor

She wipes the spring soil on the leg of her pants, examines a freshly dug carrot and takes a satisfying bite.

Although it was planted last year, it’s crisp and oh, so sweet despite winter’s cold, snow and rain.

The carrots are part of last year’s crop, grown in a neat, straight row at Follow Your Heart Farm just west of Quincy.

It’s also an example of how a season can be extended — not just with carrots, but also with cabbages and other members of the brassica collection, greens and other produce that do well in cooler temperatures. And the important thing to remember is that they will be just as satisfying in December or the following spring, as they were last August.

Together with FRC’s Darla DeRuiter, Mazar helped design this first local venture into cooperative, sustainable farming. And while the class covers a lot of material, one of the most important aspects is that it is designed for Plumas County growing conditions with microclimates in mind.

Beginning with winter classes, Mazar said she has 13 students.

During the cold months classes were held online or by remote. But now that trees are budding and early flowers are blooming, students are at one of several outdoor classrooms.

On one bright, sunny late-April day, Mazar was found in her garden classroom, or rather her office as she calls it, at Follow Your Heart Farm.

While students do a lot of the site preparation and planting, there is a lot to be done as the land is prepared for seasonal choices of healthy crops.

Although other farmers have worked the site over past summers, Mazar’s goal is to whip the area into a semblance of what she expects.

And Mazar has extensive experience, not just from her native Massachusetts, or Vermont where she earned her master’s in food systems at the University of Vermont. “I have examined farming practices for work or study in Mexico, Ecuador, India, Malawi, Tanzania, New Zealand and Italy,” she explained.

While most of the countries Mazar has visited with crop production in mind are in climates with long growing seasons, she’s more than prepared to use her northeastern United States experience in stretching every single week to its fullest and into months many local gardens wouldn’t venture into.

Extending the season to seasons is so important when someone is teaching others to make the most of what they grow in such a short growing climate.

For many of us, Plumas County’s growing season begins in late May or June — perhaps. But many of us have stories about the year of the big frost or the late spring snowstorm and the damage it caused.

And the season is over by the end of August or early September. Unless we have an early frost or an early snowstorm and that’s not uncommon when the growing season ends early.

Among other reasons for extending the season is to be able to sell produce to Plumas Unified School District for its lunch programs. Mazar said that Amber Russell, who heads up the PUSD food program, is willing to purchase everything she can get.

And the schools’ meal programs are a good source of revenue. According to the PUSD nutrition site, Food Services offers breakfast and lunch at nine school sites in the county. An average of 1,700 meals are served every day, according to Russell’s research.

Mazar said Russell is interested in purchasing locally grown potatoes, and other produce, and “a lot of herbs.”

But Mazar is also interested in growing medicinal herbs and pollinator plants and “flowers throughout the seasons.”

Vegetable choices that Mazar and her students are growing at either the Follow Your Heart Farm, another site off Bucks Lake Road and possibly other locations, is quite extensive.

Tomato varieties include Amish paste, gold nugget cherry tomato and goldie ground cherry. She also has Berkeley tie-die that her students started in the greenhouse at FRC and transplanted to the greenhouse at Follow Your Heart Farm. Maritza rose tomato is being grown as a slicer and Pomodoro Pizzutello di Paceco as a paste tomato and a slicer.

They are also growing guardsmark Chioggia beet. Chioggia beets are an heirloom variety. In this case, the Chioggia beet is known to have been grown as far back as the 1840s and comes from Chioggia, Italy, near Venice. As a bit of additional information, beets were originally found growing near the Mediterranean and Atlantic coasts of Europe and North Africa, according to Specialty Produce, an online information site on produce.

And more importantly for a season extender, beets grow best in cooler areas. Although some varieties do well in hot weather, this is one of the crops that can be over-wintered if grown correctly.

Another beet on Mazar’s extensive list is the red ace F1 beet. The F1 means that two different parents were chosen to develop the variety. In genetics it is the abbreviation for Filial 1, which means first children, according to the Specialty Produce site.

The F1 also signifies that it is a hybrid and some heirloom purists won’t grow anything that has been cross-pollinated. At the same time, some gardeners choose hybrids because they’ve been modified to reject specific diseases, are larger or of a particular shape, of a different color, have a superior flavor and so on.

Kale is another excellent example of a season extender. Although kale appears in spring and summer gardens it does best in the fall and winter. Kale is quite popular right now because of its known health benefits and is believed to help reduce the risk of heart disease, according to the Medical News Today web site.

Kale is a cruciferous or Brassicacaceae vegetable. It is related to cabbage, broccoli, cauliflower, collard greens and Brussels sprouts. Mazar and her students have chosen Darkibour F1 and black magic kale varieties.

Diamond eggplant is a more delicate plant. They like warm weather, but will continue to produce, although more slowly, as temperatures cool.

Some gardeners find that if they cut the plants back they will re-grow. It is suggested that gardeners who want more eggplants later in the season grow them in a greenhouse or a hoophouse to keep the frost or freezing temperatures away.

Mazar also mentioned that they are growing bandit leeks. Like onions, they do well in cooler temperatures and can be harvested throughout the winter.

Another type of produce that likes cooler weather is the turnip. Mazar mentions the purple top white globe turnip in her lists.

Varieties of radishes, a green tomatillo, cucumbers and even a high desert quinoa are also planned.

Sugar baby watermelon, spaghetti squash and varieties of lettuce and other greens are also planned.

Pollinator plants are important in any garden because they attract birds such as the humming bird and insects especially bees to do the work of pollinating plants. As the birds and bees work they take pollen from the anthers (male) to the stigma (female) part of the plant. They’re extremely important in the reproduction of fruits and vegetables that ultimately produce some sort of a seed.

Mazar has an interest in growing herbs for both culinary and medicinal purposes.

Tulsi, also known as holy basil, is used as a tea and a tisane; alpha calendula or pot marigold is also believed to be good for the skin; and motherwort, which is a member of the mint family. It is used for heart conditions and anxiety and helps with wounds, itching and shingles.

Mazar also just included comfrey to her collection. An old-fashioned name for the plant was bone-heal because people used to use the leaves for wrapping around wounds. It was also used as a tea at one time, but has since been discovered to harm the liver.

One of the many things Mazar emphasizes in her classes is how to create the best growing environment.

The environment can include the condition of the soil and how it’s managed, but it can also mean the pollinators used and what plants are grown together companionably. In nature, some plants just don’t grow well together. They can demand the same types of nutrients from the soil and end up competing. Their water requirements might not be compatible. And they might attract insects, such as aphids, that are harmful.

More than a garden

Mazar also believes that gardening is more than simply growing a crop. She believes that one gardener or farmer networking with another is important and encourages it at many levels.

Sharing information, seeds, and more are all part of the process.

Mazar also wants to see as many people as possible getting back to their roots where they raise their own backyard garden, work in a community garden or raise produce to sell to others.

The classes are listed under Environmental Studies, according to instructor Jessie Mazar.

“The High Altitude Crop Production is ideal for someone who is interested in developing their skills in growing vegetables, herbs and flowers, and joining a community of folks who are doing the same,” said Mazar.

On Monday evenings students will meet in person with the instructor. On Saturdays, the classes are offered by remote so people can work on their own projects.

For more information stay tuned for the FRC summer class schedule, or call the campus at 283-0202.