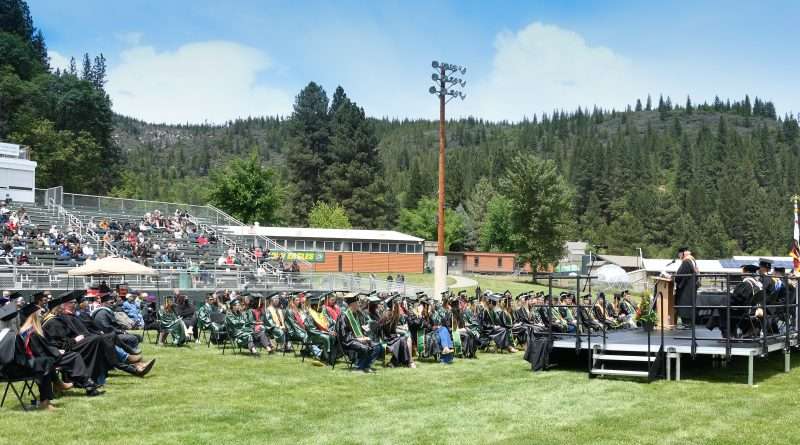 The sky alternated between gray and blustery and blue and sunlit during Feather River College commencement ceremonies on May 21. Photo by Lisa Kelly
News
May 22, 2021May 28, 2021 Editor

The wet and blustery day did not dampen the enthusiasm of the Feather River College graduates who received their diplomas Friday, May 21, at Joe Brennan Stadium.

While the students were assembled on the fields, their invited family and friends sat in the bleachers cheering on their accomplishments.

Feather River College Trustee John Sheehan welcomed all to the ceremony. “Today we celebrate the hard work of our graduates,” he said.

Quincy resident Johnny Walker played the national anthem on his harmonica, before a trio of speakers took the stage: Trustee Guy McNett who delivered the commencement address; instructor Rick Leonhardt who gave the faculty address; and Jesse Williams who delivered the student address.

Carlie McCarthy, the vice president of student services and a main organizer of the graduation ceremony, introduced Trustee Guy McNett.

“This has been an incredibly challenging year for all of us,” McNett said, talking about the effect the year has had on students, faculty and ostaff. “What I would like to make very clear to you, the student body, is that you made it all possible.”

He lauded the 2,000 negative covid tests students took to study on campus and participate in athletics. He also shared student accomplishments from the student academic symposium that drew 100 recorded presentations to the eight athletic teams that made a commitment to undergo regular testing and to adhere to all protocols in order to play the sports they love. He heralded the work of the nursing students who, on several occasions assisted with the COVID testing at Plumas District Hospital and also participated in vaccine clinics. He mentioned the nationally recognized Phi Theta Kappa program and the fact that 354 certificates and degrees would be awarded, and that 163 students were on the deans list.

Derek Lerch, FRC’s vice president of instruction recognized the efforts of faculty during a difficult year and then introduced business instructor Rick Leonhardt who had been selected by the students to deliver the faculty address.

“There’s no place I’d rather be,” Leonhardt said. “We are all here celebrating together.” He said that he was surprised, humbled and honored to be given the opportunity to address the graduates. He focused his remarks on three key words: resilience, empathy and focus.

“The last word is probably the most important, but probably the most difficult – focus” he said. He told the students to stay focused on their goals and more importantly on their dreams. “Be resilient, show empathy and remain focused and you can accomplish more than you ever imagined,” he said.

Student speaker Jesse Williams was introduced and acknowledged for “his ability to be everywhere” including at football practice, in class, dressing up as the school mascot, interacting with the community, dancing in the Star Follies, being a student ambassador and the student body president, as well as being involved in student clubs. Williams plans to continue his studies in social justice and journalism.

Williams delivered a speech that was both inspiring and humorous. “It’s been a roller coaster of a year,” he said. “It was a dubious time to receive an education.”

He discussed 2020 as time when people lost their jobs, love ones and their “damned minds.” The latter drawing laughter. Williams arrived in Quincy from Hawaii, telling his peers that his mother offered him a choice— the military or Feather River College. “I arrived with $22 in my pocket,” he said and then recounted the culture shock of arriving in a place without Starbucks or McDonalds.

He told his fellow graduates that life is not a sprint or a race, that it’s a marathon. He also shared advice from his mother: “A smooth sea never made a skillful sailor.”

Dr. Chris Connell read the name of each graduate and as they accepted their diploma, and he shared their plans for the future and their gratitude to those who made this day possible.

The graduates then moved tassels from right to left becoming the Feather River College Class of 2021.