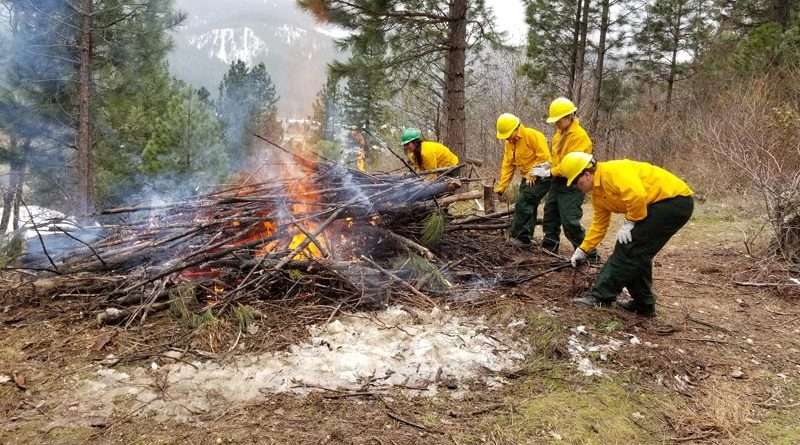 Students put their studies to practical use working on burn piles in the forest around FRC. Photo by Darla DeRuiter

It’s a good feeling when all your hard work pays off.

Thanks to more than 19 months of planning, teamwork and dedicated improvements to forestry and land management practices, Feather River College  has earned a spot within a distinguished group of proactive communities.

The college has been certified as part of the national Firewise USA program for its extensive efforts to mitigate potential wildfire risks.

One of three U.S. colleges

“With the college located in the heart of Plumas County’s forested community of Quincy, it seemed like a perfect fit to become one of the few colleges in the nation to become a unique, nationally recognized Firewise USA site,” she said. “We all welcome FRC as one of our newest Firewise sites.”

The campus is safer in several ways now and joins over 20 Plumas County communities who have achieved this honor since 2010 and are among 285 sites in California.

And while there are 1,656 approved Firewise USA communities in the nation, FRC also holds the distinction of being only the third college campus in the country to have accomplished the rigorous work it takes to become a Firewise site. The others include Young Harris College in Towns County, Georgia, and Stephen F. Austin State University in Nacogdoches County, Texas.

McCourt praised FRC for developing extensive plans to safeguard the campus, protect students and staff, and focus on both preparedness and survivability in the event of a wildfire in the area. FRC began working to earn the designation in March 2018 and was approved Oct. 24, 2019.

– Achieving and maintaining 100 feet of defensible space around campus buildings and dormitory apartments.

– Improving emergency access to the campus and water tanks.

In addition, FRC developed an education and outreach process that included:

– Promoting wildfire awareness and planning by hosting community forums and speakers on fire and fuel-management topics. The presentations are part of FRC’s annual Sustainability Speaker Series and Earth Day events.

These and other efforts were implemented in 2019 and will be ongoing through 2022 and beyond, according to the college’s plan.

FRC President-Superintendent Kevin Trutna, Ph.D. described the application process and multi-pronged action plan as a grass-roots effort by several faculty, staff members and students “to create a mindset and practices that align with fire prevention throughout campus.”

The college created its own FRC Firewise Board and involved the campus safety committee.

Appreciation for the ongoing physical work of raking, weeding, mowing, pruning and clearing vegetation goes to FRC’s outstanding facilities staff and Trutna said, “We are especially excited about the involvement of students through our environmental studies classes as they apply what they have learned in the classroom to the campus forest ecosystem.”

The college president also credited Bridget Tracy, an FRC environmental studies and earth science instructor, with taking a leadership role to carry out the application process.

Trutna thanked everyone involved in the Firewise application process that required partnering with several agencies, Cal Fire, Quincy Fire Department and the U.S. Forest Service among others.

He attributed the success of the effort to outlining and adopting an aggressive campus forest health plan, one built upon a “multi-dimensional approach to stewarding a healthy forest and campus ecosystem that is resilient to the threats of fire and a changing environment.”

McCourt with the county’s Fire Safe Council commended the college for seeing the long application process to a successful conclusion and launching its continuing wildfire mitigation program.

“Being a Firewise site has added another layer to FRC’s wildfire fuel reduction program,” she said, “with an additional focus on building survivability on the campus and emergency preparedness for students and staff in the event of a wildfire in the area.”

McCourt has a lot of experience working with Plumas County communities and residents who want to take action to make their homes, buildings and properties safer in the event of wildfire.

She said people who participate in the Firewise process create an action plan that commits them to a sustained program of wildfire mitigation, “which is generally both physically doable and cost-effective.” Ultimately, she added, each community (including FRC) creates their own plan, and develops unique solutions tailored to their own area’s population and wildfire mitigation challenges.

McCourt explained that the benefits are far reaching with FRC’s unique site, to both the campus and the adjoining communities around Quincy.

“I am excited for the next generation to participate in this program; bringing new ideas and concepts into the program and taking them into communities where they will live in the future.”