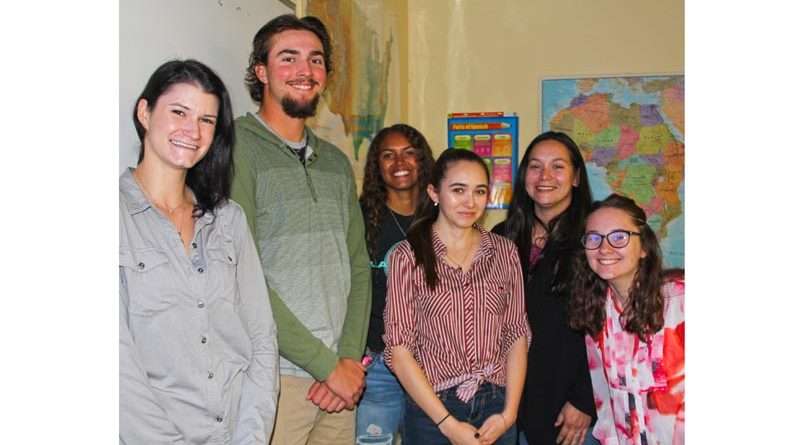 When Feather River College students sign up for the “Introduction to Wildlife” class taught by environmental studies expert Darla DeRuiter, Ph.D., they know they’re in for hands-on training and a chance to team up with working biologists.

“To be allowed (so) close to wildlife was an amazing experience,” said Kyla Deocampo, one of 14 students in the Environmental Studies 240 class that received crucial training and safety tips, like how to keep a deer safe while studying it, avoiding getting injured by antlers and staying clear of wildly kicking hooves.

It’s a good thing they received that advice, several students said Nov. 25 during the FRC Student Research Symposium held on campus for 200 students, staff and guests.

“Deer don’t exactly like being caught,” one student said, explaining details of their exhilarating October project to study a Columbian black-tail deer whose habitat includes the FRC campus. “We partnered with California Department of Fish and Wildlife biologists and they taught us what to expect, general safety and how to watch out for a buck’s points and legs. Deer do a lot of kicking!”

Questions from the audience included, “Were you scared?” (a little); “What surprised you the most?” (deer might look dainty but they’re amazingly strong!); and one from a little girl, attending with her mother, who asked, “Was it fun?”

The presentation team answered with a unanimous, “YES!”

The class worked on a number of wildlife biology projects this fall and placing a temporary radio collar on a live deer to track its movements on campus was definitely the highlight of the semester, according to a team of students who outlined the field results.

The deer-collaring studies began eight years ago to teach students about different species, methods of wildlife monitoring and career paths in the field.

DeRuiter’s classes have learned to safely capture a live deer on campus using drive nets (2011 to 2014), drop nets (from 2014 to now), or chemical immobilization with tranquilizers (biologists do that part). Over the years, they have collared 10 animals.

“It’s nice to have the time to talk with the biologists while we wait,” one student told the symposium audience. “They tell us about their careers, which is really helpful to us.”

Another student had the audience laughing when she said, “We had to ‘MacGyver’ things a few times in the field because not everything goes smoothly when you’re out there!”

“This class wouldn’t be possible without our partners at CDFW, the Plumas National Forest, Plumas County Sheriff’s Office and others. They provide students with a range of experiences to get them a sense of what working in the wildlife field is really like.”
Darla DeRuiter, Ph.D.
Feather River College

Then the big moment happened and suddenly a deer was netted. Each student played a part and once the animal was calm and secure, students covered the deer’s eyes, temporarily hobbled it and took measurements. The class checked vitals such as temperature, respiration, oxygen levels and heart rates. Then they collected blood samples, applied ear tags, placed the radio-telemetry tracking collar and released the animal.

The collar was programmed to drop off automatically in 28 days, at which point the students used radios to triangulate and track the VHF signals emitted from the collar.

“The capture itself just solidified what I really want to do in life and I am very much looking forward to my future in the wildlife field,” said student Hannah Nurmberg.

This year’s class recovered the radio-telemetry collar in 15 minutes. The GPS data from the tracking effort precisely showed the deer’s movements and provided valuable information for wildlife specialists.

Mostly, the deer “seemed content” to stay close to the FRC campus, the class found, a result replicated from prior year studies.

“The collar pinged the deer’s movements every hour,” a student presenter said. “We learned they like to hang out around the science building, the campus green and the willows area. It’s a lot like our daily habits. A collar on you would show you going to the same places all the time.”

Other students expressed their appreciation for the hands-on opportunity the class affords, saying this kind of experience is “rare” today.

Amanda Gonzales-Schlagel said she learned a lot about her classmates, working together and “being serious when presented with a job. I also learned more about myself and my respect for animals and how to be thankful for their lives as well as mine.”

Rebekah DeCavitt agreed, saying, “I learned a lot about deer behavior from this lab and would love to do something like this again because it’s a great tool for furthering a career in environmental studies.”

“This class wouldn’t be possible without our partners at CDFW, the Plumas National Forest, Plumas County Sheriff’s Office and others,” said instructor DeRuiter. “They provide students with a range of experiences to get them a sense of what working in the wildlife field is really like, from game wardens to biologists and more.”

“I would love to be a part of the deer project again. It was one of the coolest experiences in my life and I’ll never forget this incredible experience.”
Student Adrian Rosales

“That was part of a national study,” DeRuiter explained. “Acorns are a really important food source for bears, deer, turkeys, acorn woodpeckers, squirrels and other wildlife species.”

For DeRuiter, teaching FRC’s introductory wildlife course is rewarding on many levels, especially the impact it can have on students and their futures.

“It was a fantastic experience and I am thrilled to have been a part of it,” Heather Pinckney said. “I hope the environmental department continues to do this project in the future. This project just exaggerated my excitement to graduate and become involved animal protection as a game warden.”

Her classmate was equally enthusiastic.

“I would love to be a part of the deer project again,” Adrian Rosales said. “It was one of the coolest experiences in my life and I’ll never forget this incredible experience.”

The following partners assisted FRC in this endeavor:

California Department of Fish and Wildlife employees and biologists: