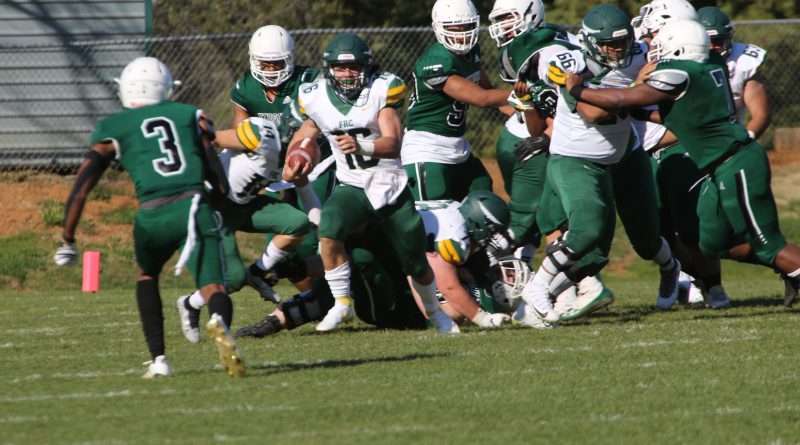 FRC quarterback Jared Taylor, no. 16, bursts through the opposition in one of his 11 carries for a total of 31 yards. Taylor threw all three touchdown passes for the Eagles on March 13 in Redding. Photos by Mari Erin Roth
Sports
March 18, 2021March 20, 2021 Editor

The Feather River College Golden Eagles football team was hosted in Redding by the Shasta College Knights for the first game of the season March 13. The stands were completely empty as athletes took the field under perfectly blue skies midday between winter storms.

FRC was slow to start and Shasta used its home advantage well, but the Eagles rallied in the second quarter to give the Knights a run to the finish.

The first points on the scoreboard for the Eagles came from Sam Marshall when he caught a 34-yard pass from Jared Taylor after a 4-play drive of 60 yards. The Knights led 24-7. Shasta scored again at the start of the fourth quarter with 10 minutes left in the game. With a good kick from Eagle Chysen Lagunes-Rapozo, the Eagles made their mark, 31-7. FRC Roy Davis caught a 48-yard pass from Taylor to score with 8:32 left in the game and with another good kick from Lagunes-Rapozo the score inched closer, 31-14. The Eagles were fueled and fired up as FRC’s Da’Jon Thomas carried a 43-yard pass from Taylor into the end zone to score with 2:02 remaining. C. Lagunes-Rapozo landed his third extra point for the final score 31-21.

Eagle quarterback Taylor had eight completions out of 13 attempts for 166 yards and threw passes for all three Eagle touchdowns. FRC quarterback George Tribble completed three of 10 attempts for 27 yards.