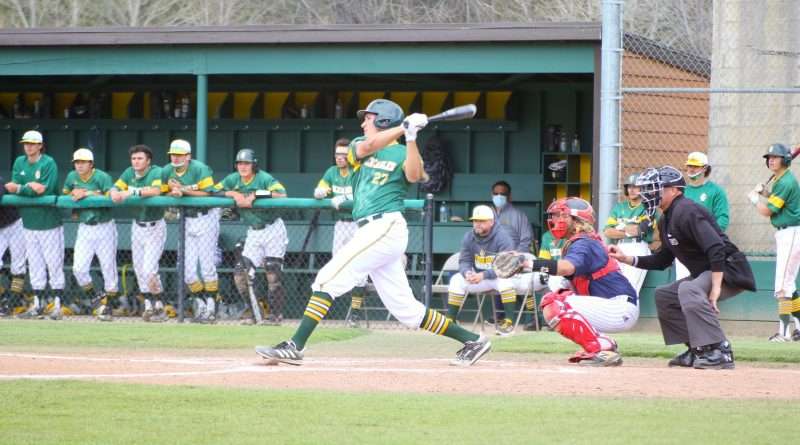 The Feather River College Eagle ball teams began playing a couple of scrimmages the end of March. Men’s Eagle baseball won their first game of the season at Lassen in an 8-inning sweep 11-1. Their second game of the series provided a bigger spread as they won 30-4 over the Lassen Cougars in Susanville.

The FRC team split victories with the Siskiyous Eagles in Quincy, winning one of two, 8-1, and losing the second game 16-4. Jordan Brandenburg, Jake Madison and Garrett Damico scored two runs each in the 8-1 victory. Cooper Kitrel and Jerry Thomas both crossed home plate once for the Eagles. Dylan Cabral handled pitching with four strikeouts of 28 batters faced with relief pitching from Andrew Burmer striking out one batter of four faced.

The FRC Eagles traveled to the Siskiyous home diamond to win 12-7 and lose the second game, 10-6, April 17.

The Eagles have four games with Butte and two with College of the Redwoods remaining in April. Restrictions have lightened up somewhat but it is best to check with the FRC athletic department before heading out to a game. Valerie Campa can answer questions with up-to-the-minute conditions and restrictions for FRC competitions, 283-0202.

The baseball schedule is full of games through May. “Our guys are excited to be back on the field playing games,” said FRC head baseball coach Terry Baumgartner. “They are working hard to improve every week.” The Eagles will continue to compete with relatively close-to-home teams, Redding Redwoods, Shasta Knights, Lassen Cougars, Siskiyous Eagles and Butte Roadrunners.

“I am really proud of these girls for their will to succeed and better themselves everyday,” said FRC head softball coach Meredith Aragon. “They have taken on many challenges this year and they continue to impress me with their drive and love for the game and each other.”

The Eagles lost their first two warm-up games April 10 to the Butte Roadrunners but came back to win both home games with the Siskiyous Eagles, April 15, 6-4 and 6-1. Runs in game one of the winning double-header were scored by Kaylah House, Jeslyn Svejda, Brenna Chavez, Chloe Yturbide, Samantha Conder and Brianna Ferguson. Third base Chavez hit a home run that brought her three RBIs and second base Ryann Reese hit a triple for two RBIs. Quincey Love hit a single RBI.

The ladies schedule carries them into the month of June with their final game June 5 at Sierra College.

“We will continue to improve and I’m excited to watch this team grow and finally be able to compete in the season,” said Aragon.