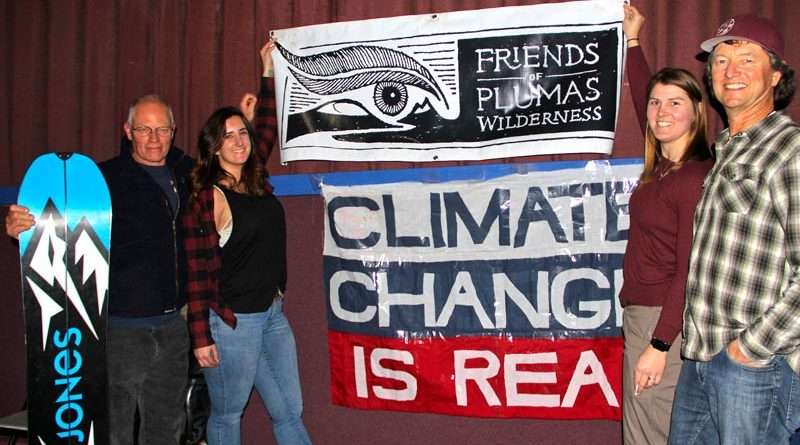 “Get active, protect our wild places and work for global climate issues,” Meadow Valley’s Darrel Jury told a packed audience at a recent showing of the Teton Gravity Research film “Ode to Muir” held at the Town Hall Theatre in downtown Quincy.

“Without the people who have gone before us, we wouldn’t have these places to escape to where we go to play and enjoy the wilderness,” Jury said. “We need more people to protect these places today. It’s on us to save the wild, free-flowing waters and remote mountain peaks.”

Hosted by the local nonprofit Friends of Plumas Wilderness (FPW), for which Jury serves as president, in partnership with Plumas Arts, the event was designed to promote public interest in the Plumas National Forest Service’s current draft winter travel plan.

Comments on the draft plan were accepted through Jan. 24 and in partnership with FPW, the Winter Wildlands Alliance encouraged protection of terrain east of Bucks Lake Wilderness, the Bucks Creek Loop Trail, the Historic Lost Sierra Ski Traverse Route and the backcountry ski zone on Thompson Peak by Susanville.

They also requested the Forest Service to stop grooming on 24N33 to help prevent over-snow-vehicle trespassing into the Bucks Lake Wilderness.

Jury spoke about the pressing need to advocate for quiet places in wilderness areas where “human-powered” recreation can be enjoyed now and for generations to come.

“Climate chaos is happening today,” he said. “We need to protect our global climate, as well. If we don’t do it, who is going to? Let’s do everything we can and let’s be the heroes we so desperately need.”

The film captured the essence of being in big wilderness while revealing the effects that climate change has had on these higher elevations.

In the hour-long movie, Jones introduces distinguished preservationist John Muir to a new generation of wilderness advocates by sharing similar revelations the two activists experienced a century apart in the same wild places.

“The older I get, the older I like my snow,” said Jones, narrating the adventure and skiing off on a steep descent down a blizzard-white face of granite 11,000 feet up in the Western Sierra.

The famed snowboarder and his companions hiked to, and skied down from, heights up to 14,000 feet over the nine-day adventure.

Jones also talked about the opportunities that climate challenges present here at home and around the world and discussed California’s snow- and water-capture system.

“Rain doesn’t work,” Jones said in the film. “It blows out our water-capture system. Snow is critical.”

Later, against a tree-filled backdrop, Jones added, “It’s not like these pines are threatened by bulldozers (development), but they’re definitely impacted by the higher temperatures (being experienced with climate change). The reality is, if nature fails, humanity fails.”

“If you are a passionate outdoor person, you will want to learn from POW’s athlete ambassadors who offer insights on how you can become an effective climate advocate,” he explained.

Since 1975, Friends of Plumas Wilderness has grown as a local grassroots conservation group dedicated to studying, exploring and maintaining the integrity of natural ecosystems where the Sierra Nevada meets the Cascades.

Friends of Plumas Wilderness and its partner organizations encourage everyone to feel inspired and act on behalf of both local wild places and global climate issues.

FPW hosts a variety of environment-themed events to highlight ways people of all ages and backgrounds can become effective agents of change to save their planet and the places they call home.

1) Find Your Biggest Lever — We all have a lever, we just need to use it.

– Can you change things at your school or work?

– Do you or your family own a business?

– Do you have a social media following?

– Are you a writer? Scientist? Artist? Speaker?

– Vote for the environment. Check out LCV.org.

3) Educate Yourself — Knowledge is power.

4) Speak Up — Talk to your friends about climate change, biodiversity loss and the need to act now.

– Write a letter to the editor or an op-ed to your local paper.