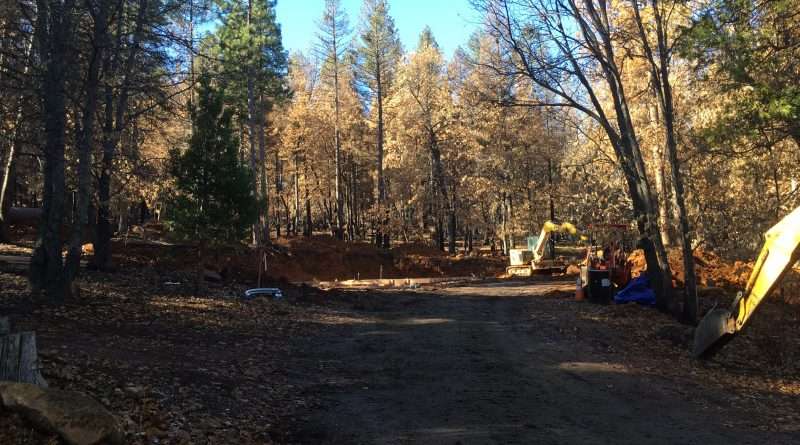 In early November three Indian Valley residents Sue Weber, Moorea Stout, and Tyler Pew headed out to an unlikely place together: Greensburg, Kansas, on a fact finding mission to help Greenville recover from the Dixie Fire.

It was not a fluke. In May of 2007 a fierce tornado leveled 95 percent of Greensburg, a town of about 1,200 before the tornado, which now has around 700 residents left. The people of Greensburg learned many lessons in 14 years of what to do and what not to do after a disaster—and welcomed sharing their experience with Weber, Stout, and Pew—and anyone wanting to take the time to get to know their town and their struggle.

On Nov. 20, the three reported back as to what they’d learned on their trip and to let Greenville residents who took time out on their mid-morning Saturday to come hear what they had to say at Greenville Elementary School Cafeteria know that they are needed to be involved in their own recovery. There were a little over a hundred people in attendance, many of whom make up the volunteer core of Greenville events.

Supervisor Kevin Goss began the meeting and called it the “first kick off of a lot of meetings for the rebuilding of Greenville.” He addressed the clean up operations and said that so far over 100 sites had been cleaned up.

“We need all of the players in Greenville to pick up the pieces and put it back together,” Goss said, by way of explaining that the purpose of the meeting was both informative and a quest to find volunteers willing to work for the long haul of recovery.

“We’ve all lost a piece of Indian Valley whether we lost a house or not,” said Goss. He also noted that the community recovery has begun and there is a good deal to celebrate including Frontier putting in fiber optic cable, Evergreen reopening and opening up a gas station in 2022, the new Riley’s Jerky breaking ground, and Indian Head Properties’ Cassie Barr starting “The Spot” – which will be a cluster of food trucks with a possible mini Way Station in the works.

It wasn’t the first meeting in the cafeteria since the fire. There have been plenty of CalOES and FEMA meetings here, but this was different. This one introduced the Long Term Rebuilding Group or (LTRG) and the volunteers from within the community willing to head up various aspects of recovery; this one was about Greenville helping Greenville. The audience learned that a working group LTRG has been meeting regularly since the fire to have conversations on what it would take to rebuild and more importantly, what it takes to build back in a way that is both economically feasible and with economic development—acknowledging that pre-Dixie Fire Greenville’s population had been dwindling as jobs over decades had bled out of the area. The people in Greensburg, Kansas felt that too and while they have built back houses and civic buildings (Greensburg is its county seat), they did not have the economic development component that would have made it thrive.

Weber, Pew, and Stout all addressed in their own way, the need to come back thriving and not simply a return of some houses.

Weber spoke to the crowd first in an effort to acknowledge what is fast becoming a common issue for residents—dealing with trauma.

“Trauma is real. The neuron pathways in our brains have been disrupted,” Weber said, continuing that it is crucial for Indian Valley residents to acknowledge that we are living in trauma and to get back into routines that can help dissolve some of that trauma.         “Everything becomes overwhelming. It’s crucial we understand and respect that. We have the capacity to reach out to each other. Do this together with the sole purpose of rebuilding. Every interaction we have, do it with love.”

She also gave dire warning, “We cannot as a community rely on 10 or 15 people. It has to be all of us.” It’s a situation Indian Valley knows all to well as in recent years as population has dwindled, the same few core retiree volunteers show up for the bulk of events and projects. Rebuild she warned, cannot be accomplished with a few carrying the burden for all.

Tyler Pew began his portion of the discussion asking all present to raise their hands if they were going to stay and grow the community, if they knew people without a place to live, and if they were concerned about the process of rebuilding. Nearly all raised their hands. Mood boards that presumably he placed in the back of the cafeteria were available for the audience to place stickers on the words that most resembled how they were feeling. The word ‘tired’ had many stickers next to it, (other words on the board were ‘sad’, ‘angry’ ‘helped’ etc.) as well as more positive words.

Pew discussed his portion of the talk from an architectural standpoint—his background being in design—for a creative vision, an assessment of resources, and clear policy and procedures. From the Greensburg model, the three learned that many entities combined under fewer buildings—for example the post office, thriftstore and a resource center could combine under one building to save building costs with separate space for each. A library, Internet café, and town hall/theatre space and community center could be in one building as well. The ideas for rebuilding will need to be addressing the needs of the community rather than simply complying with convention or the expedition of the county and state.

Moorea Stout, who serves as the planning commissioner for the Indian Valley district, began her presentation with some comparisons between the two small towns. In the tornado, Greensburg lost its schools and market and while truckers pass through the town, the town is flat and has no viable tourism economy.

“Who wouldn’t want to live here?” Stout asked. A rebuild will be a combination, she reiterated, of people who choose to remain and getting more people to move here because of quality of life and economic opportunity.

Greensburg is the home of the most sustainably built energy efficient buildings per capita of any town in America. A model in many senses of the word. That’s another aspect of the rebuild the three visitors to Greensburg from Greenville were considering.

Weber stressed the need to remember that Greenville is unincorporated and without a mayor so that everything about the rebuild has to go through the board of supervisors—some of which admitted at the last supervisor meeting that they had not visited Greenville to assess the situation in the then over two months since the fire.

“We need to keep our foot on the petal on the county level and be loving and tenacious in this process,” said Weber.

“Every day that we wake up and people still do not have housing here, means more people we will lose out of the community,” said Weber.

“We need to keep looking forward of not just what was here before [the Dixie Fire] but what we would like to have here,” said Weber.

“We will need community leadership and community pressure on the county,” said Pew, “[those outside the area] need to know we are top of the watershed and top of timber. We’re still here.”

Stout too echoed these sentiments in getting people outside the area, and possible resources and funding, to see the connection Greenville has to the rest of the state. It’s up to all of Indian Valley, in her estimation, to get that point across.

“In many ways we have a blank slate. We need to see what’s possible. I think we can do it better. Greenville has tenacity, a strong work ethic, and some very talented people who live here,” said Pew.