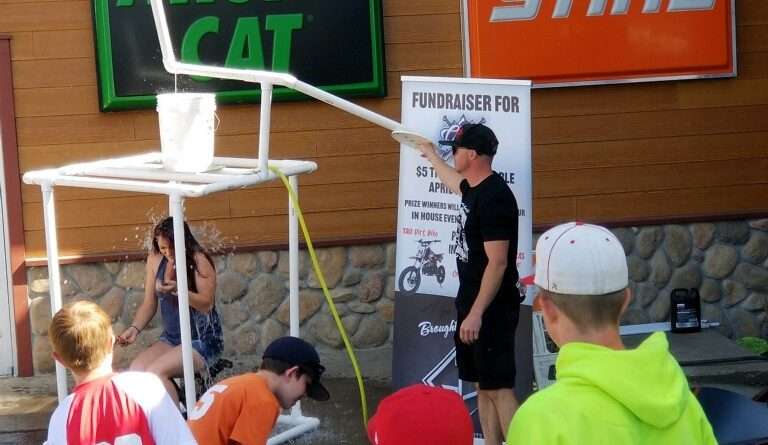 Quincy Little League Coach Breanne Olsen gets a full bucket of water poured on her head courtesy of her boss, Bobby Gott. Gott serves on the Little League board and is owner of Gott Powersports. Photo by Richard Wilson
News
May 19, 2021 Editor

Quincy Little League is the beneficiary of $12,600 thanks to the generosity of Gott Powersports.

Owner Bobby Gott, who serves on the Little League board, organized a raffle that featured a chainsaw, a pressure washer, two remote control cars and a motorcycle. Gott donated the prizes so that all of the ticket sale proceeds went to Little League.

The funds will be used for uniforms, equipment and field maintenance. “I plan to make this an annual thing,” he said.

The prizes were awarded during an open house at Gott Powersports on May 8. Bobby and his wife Kayla purchased the business in early 2020 and then Covid hit. “We bought the business a year ago then seven days in, then halted.”

However, despite the challenges, Gott remained open and enjoyed the support of the community. He recognized that support with an open house that featured food and fun, with a bounce house, games and face painting for kids.

Gott is the father to two sons, the eldest of whom at four-and-a-half is playing T-ball this year. Gott is giving back to the sport, just as his father, Dave Gott did.

“My dad did a lot of this,” Bobby said, referring to his late father, Dave Gott, who for years supported Little League.

In addition to the raffle, Powersports employees found other ways to benefit Little League including developing a dunk tank of sorts. Breanne Olsen, operations manager for the company and also a Little League coach, coaxed her fellow employees and others to have water dumped on their heads. “We raised an additional $180 for Little League,” Olsen said.