On October 28, 1941, Gale was born to George & Florence Vivion in Yuba City, California. She was raised on Bar-V-Bar Ranch, outside of Marysville, CA, by her father, where he owned a private Duck Club, District 10. Gale would learn how to live the ranch lifestyle there. While attending Marysville High School, she played the clarinet and was a baton twirler for the marching band. 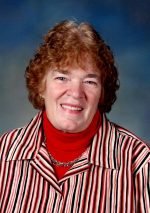 After graduation, she married William Edward Salem of Plumas County. They wed October 31, 1959, soon after they bought a piece of land in Beckwourth, California, where they would raise their six children together.

Gale spent her time crafting, sewing, baking, canning, and gardening throughout her life. She never left the ranch lifestyle. She tended to their horses, chickens, sheep, pigs and beloved dogs. Her leadership and cooking skills landed her in various kitchens like the Beckwourth Tavern, Portola Pizza Shack, Fireside, and Dairy Queen.

Her practicality led her to bring “Salem Indian Tacos” to the Plumas-Sierra County Fair for 35 years. Three generations contributed, and immeasurable memories were made during that time. While her girls performed their 4-H functions, Gale was involved in leadership with the Plumas-Sierra 4-H club. While living in Oregon, she spent many great years volunteering in the foster grandparent program with Head Start.