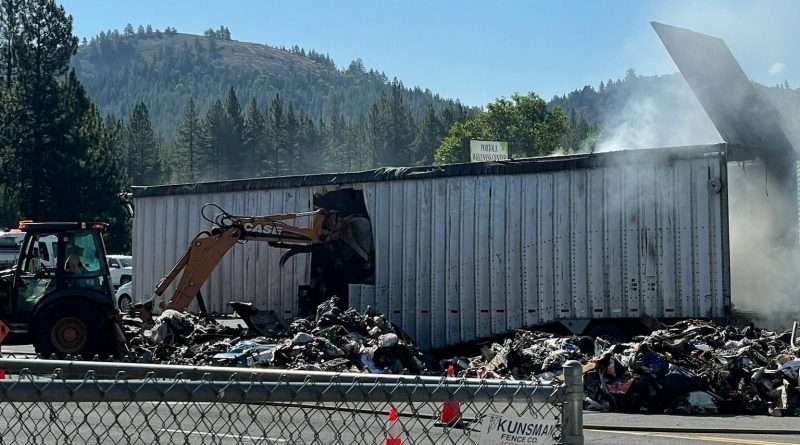 The east bound lanes of Highway 70 running through the City of Portola are currently closed with Caltrans doing traffic control to guide vehicles through town after a report of a burning truck trailer near the Sierra Energy gas station.

In speaking with City Manager Lauren Knox, it was confirmed that a call had come in at 7:03 a.m. reporting a truck carrying garbage from Quincy which had somehow ignited.

The scene unfolded across from the office of Julie Ruiz with the Northern Sierra Air Quality Management District (NSAQMD) and she noted that the truck was stopped in the middle of the road.

“The fire really got going by this time,” Ruiz said. “We already have so many firefighters in town right now for the Beckwourth Complex, and one wildland crew suddenly appeared on the scene and used their chainsaws to cut down the speed limit sign nearby.”

Ruiz then explained how she and other bystanders had observed the crew rapidly slicing the signpost into blocks, detaching the truck cab from the burning trailer, and then had the trailer lifted up on to the makeshift wooden blocks.

Beckwourth Fire Department, Graeagle Fire Department, Eastern Plumas Rural Fire Protection District, Caltrans, Intermountain Disposal and the City of Portola all responded to the incident as well, rapidly working to get the burning garbage pulled out of first the back and then the side of the trailer and spread out on Highway 70 to be extinguished.

Knox noted that the water from the incident was immediately dammed from escaping into the Feather River, with straw containment barriers immediately utilized and backup containment lines formed.

When city workers arrived on scene, they began pumping out the dirty water and according to Knox, no water is known to have reached the river at this time.

This is a developing story. More information will be added as it becomes available.