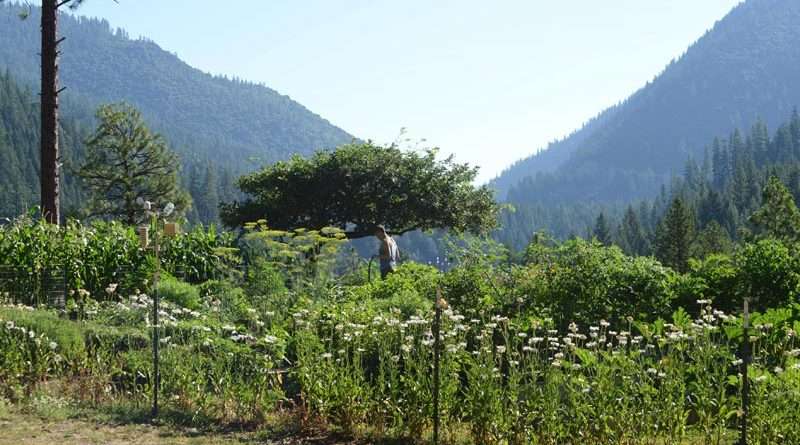 Sarah Johnstone hand waters the garden that appears to be somewhere near the top of the world. George Scheuchenzuber sort of fell into gardening a number of years ago. A buddy had to move away and asked if George would finish raising his plants. Sarah has far more experience working an acre of vegetables in the Beckwourth area. Photos by Victoria Metcalf
News
July 24, 2019July 31, 2019 Victoria Metcalf, Assistant Editor

“A long and winding road leads to” one of the featured gardens in this year’s two-day Farm Crawl.

Anyone choosing to visit George Scheuchenzuber’s and Sarah Johnstone’s garden are in for a treat the moment the blacktop ends and the hard-packed dirt road with no name begins its narrow, twisting route up the steadily climbing way.

For yards the branches of the hillside trees form a canopy that envelopes people in a sense of adventure, as it seems they’re traveling into another realm.

And then it’s gone and the road continues its circuitous route before another narrow road forks off from the main one.

Through a metal gate where private property notices are prominent, are the view of the long, partially fenced garden and a panoramic view of a mountain range.

As it turns out, George chose to locate his garden at the edge of his property. And edge is exactly right since it drops off into almost nothingness except trees far below. This is also the reason he chose to eventually call the place the Garden at Hillside Homestead on the former White’s Flat Mine.

George bought his nine acres long before he was a gardener or began dating Sarah. “I bought this land to be out of town,” said George, who’s also known as George the Barber in the Quincy area.

George started with a few pot plants and just kept on growing. “I fell in love with taking care of them,” he said about his few plants. Through building the soil and tending to the plants George said he discovered real meaning — not just about how gardening works, but things about himself and how life work.

“I found that I was falling in love, just falling in love with it,” he explained recently. Both George and Sarah, seated side by side at a wooden picnic table on the hard-packed earth George literally dug out of the more gently sloping hillside, they talked about one of their shared passions and their new relationship.

The process is what Sarah calls a new vision. Here they were gardening at opposite ends of the county — he not far from the Dawn Institute on Highway 89, and she at BloomStone gardens in Beckwourth.

By doing “the garden in our style, we’re cross pollinating,” Sarah explained about her take on their relationship. “That’s beautiful baby. You’re going to make me cry,” George confessed as he wrapped an arm around the slender woman.

In fact, they’ve come to realize they were leading parallel lives before they started dating. A few people weren’t too surprised when they got together.

Sarah and George didn’t mention any compromises they might have had to make as they followed their love of gardening. They agreed that pesticides have no place in their world. “We’re not certified organic, but we’ve been practicing it,” she explained.

They also agreed that they would continue George’s practice of buying much of what he requires for the garden from Gray’s in Quincy. “It’s so much different going to the nursery rather than the hardware store, another place I like to go as a man,” he explained.

In the beginning he found himself hauling pallet loads of bagged soil and amendments home from Gray’s. That’s where he also bought the majority of his starter plants, as he calls his crop.

He also made a habit of purchasing his seeds at the end of the season sale at Quincy Natural Foods. Until this year, that meant he was purchasing seed from High Mowing Gardens or from the line that Gray’s carries. “Seeds last a lot longer than the package life states,” he said.

Sarah is the seed saver, he said. She’s also the one who’s kept notes and journals of past seasons. Together they haven’t done that this year, but George thinks it’s a good idea that they start.

Sarah said that keeping track of the garden tells her what went right and what didn’t work. She can remind herself of things that she tried.

And George said they try a lot of different experiments. One year he used alfalfa on the garden and that worked out well. He is also experimenting with llama dung and will try mushroom compost.

George said he does some trading with people in order to be able to try different applications or plants in the garden.

He’s also good at reviving plants. He’s been known to start out with a tiny, struggling plant and watch as it turns into healthy, thriving plants.

He also likes to experiment a little on what he grows. One year he bought a six-pack of artichoke plants. They’re now the best artichokes that the couple has ever eaten.

Squatting down next to an okra plant, he pointed out a single okra. Just the night before they enjoyed freshly harvested okra with Bitchin’ sauce added. They agreed it was an excellent dish.

George reminded people that okra shouldn’t be overcooked because it gets slimy. He prefers it raw and just very lightly cooked.

When considering food, George said that he now includes a helping of greens under his fried eggs for breakfast.

And just that morning Sarah walked out of the tiny home eating a mix of greens and possibly some sort of crumbled white cheese.

Sarah and George actually knew one another quite a while before they started dating. Sarah used to work at the Feather River Food Coop in Portola and George would stop by and visit her.

He said he was interested in her long before they decided to go out. Even then Sarah said that she’s a free spirit, thought she had her life figured out and didn’t want a man around.

Obviously all that’s changed, and they’re opening their now shared garden so others can see what their cooperative plans have produced.

This August, gardening enthusiasts and the curious will have two days to see all the participants in the Farm Crawl.

Slated for Saturday, Aug. 3, and Sunday, Aug. 4, the event offers 13 or 14 sites available on different days, according to Laura Rodriguez, a Farm Crawl organizer.

In Meadow Valley, Let it Grow, FulHat Farm and SnowSki Garden are on the list of participating gardeners.

And the University of Earth Medicinal Garden is in Graeagle, according to Rodriguez.

The Plumas Grown Farm Crawl is sponsored by the Plumas Farmers Guild. For more information, contact Laura Rodriguez at (707) 217-6412 or [email protected]