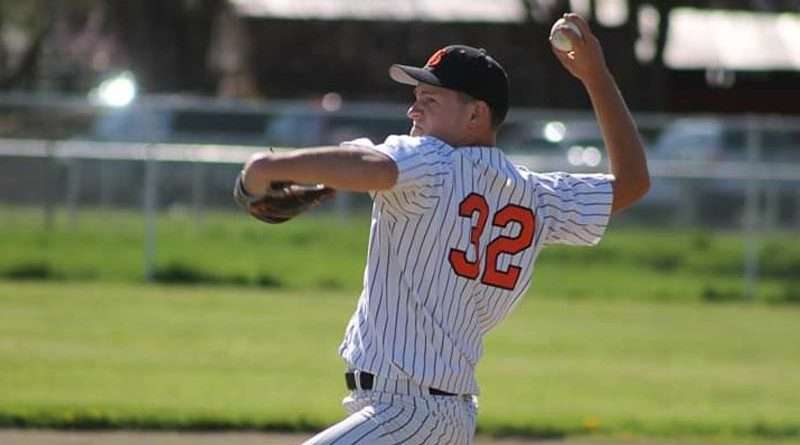 Kolby Elzea leaves his catcher’s mask behind to pitch for Greenville. Photo by Anna Lawson
Sports
May 11, 2019May 9, 2019 Mari Erin Roth, Sports Editor

Greenville baseball sits in second place in the league with a 6-1 league record. They are 12-2 overall.

The Indians hosted the Happy Camp team for a doubleheader April 25, winning 10-0 and 19-2.

Dawson Reed stole two bases and Hilpert, Neer, Miille, Lawson and Hampton all stole a base.

Kolby Elzea served as catcher for GHS pitcher Tristin Clark. Facing just 12 batters, Clark struck out six in a game pitch total of 48. “It was a no-hit shutout,” said Yocum.

Hilpert, Clark, Miille and Hampton were all hit by a pitch.

Clark stole three bases and Neer, W. Lawson and Miille each stole a base.

The Indians played the Portola Tigers in a rematch April 26 and won in a tight 11-10 game in Greenville.

After a loss to the Tigers in Portola, 12-8, the previously undefeated Indians were really on the warpath and ready for payback on the Greenville diamond.

GHS held the Tigers in the first inning and managed to get on the scoreboard first with one run. The Tigers came back with a pair of runs to take the lead in the second inning 2-1. Neither team allowed scoring in inning three. In the top of the fourth, PHS scored 3 runs to reinforce their lead, 5-1. The Indians came back to take it all away in the bottom of the inning with six runs to lead 7-5.

Both teams scored well in the fifth inning adding four runs each, 11-9 Greenville. In the top of the seventh inning, the Tigers managed a run, but that only brought them closer, but no cigar. GHS reclaimed the game they lost to the Tigers. The game was exciting and fans were very happy with an excellent performance from both teams.

“It was the way the game ended that was unique,” said Yocum. “Bases were loaded with one out and Wade Neer made an unassisted double play to end the game. It was an exciting game.”

Clark and Miille stole two bases and Hilpert stole one.

The GHS boys lost to the top-seeded American Christian Academy Eagles in a Greenville home game April 29. The loss represents the only loss for the Indians in the league this year.

Colton Lawson, Harlan Savala and Kolby Elzea scored all the Greenville runs in the bottom of the fifth inning. Savala managed a double from the Eagle pitcher, senior Conner McCoy, who struck out 16 GHS batters.

The GHS boys won their league game with the Eagles on the road May 1 by a score of 25-5. The original game was rained out, but the GHS Indians apparently didn’t mind the wait.

GHS started out strong with four runs in the first inning, five innings in the second and a single run in the third inning, 10-0. Dunsmuir put their first runs on the board in the bottom of the third with five big runs, 10-5.

Greenville came back with two runs in the fourth inning and … 13 in the fifth and final inning! Wow Greenville, mighty impressive.

Miille was hit by a pitch twice and Clark, Reed, Elzea and Hampton all “wore a pitch” for the Greenville team.

The Indians were swift on the bases stealing a total of 14 bases. Barr and Clark both managed to steal four bases! Neer, Miille and Elzea all stole two.

The last regular games of the season for the Greenville Indians were Tulelake on May 3 and a doubleheader with Williams on May 6. Stats and reviews of these final three non-league games will be covered in next week’s sports section as they become available.