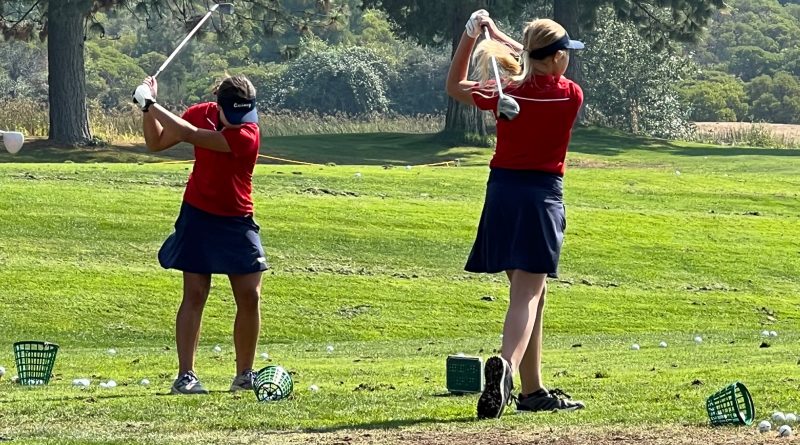 With a new school year comes a brand new team for Quincy High School: Girls’ Golf. League play continued this week with the Trojans competing at The Mount Shasta Resort in Mount Shasta. Despite the long drive, the Trojans started off well, with Freshman Abby Warren striping her opening drive down the fairway.

Warren is joined on the team by Sophomore Zenia Moghaddas. “They are great girls,” says Coach Matt Warren. “They are both thoughtful players, and their game is developing week by week.”

Quincy is the first team in the county to launch a Girls’ Golf team. In the past, girls played as part of the school team in the spring, but because it is a co-ed field, all players played from the same set of tees, and there were limited playoff opportunities for the female players. “Golfers could qualify, but the girls were at a disadvantage, especially in the later playoff rounds,” explained Coach Warren.

Instead of playing 18 holes in league play, Girl’s Golf starts with 9-hole matches. In some tournament settings and in the playoffs, the matches extend to the more traditional 18 hole format.

“We hope that Quincy starting a Girl’s Golf Team will be a model for other schools in the county,” says Coach Warren. “We have fantastic courses in our area, and they are all wonderfully supportive of youth golf. Plumas Pines has been great about allowing us to practice at their facility, and Brandon Bowling gifted his time in helping the girls improve their game. Our goal is to have a local league next year. One that is designed to help grow the game and allow for students to potentially dual-sport with Golf next fall.”

“The drives are looong,” says Zenia Moghaddas. “Today we drove over four hours to get to our match. Most of our matches are in the Redding area.”

“A lot of our budget is just getting us to matches,” says Abby Warren. “I would love it if we could play our local courses against local teams.”

Despite the long hours traveling to matches, both girls love the game. “Golf is a lot of fun,” says Abby Warren, “it’s not just a game for adults.”

Moghaddas agrees, “Golf is a very emotionally rewarding sport, which I like. You have to push through frustration, and when you finally get your good shots back, it feels really good.”

As the season continues, the players are working towards their personal goals; for Zenia that means “by the end of this season, I want to make a habit of confidently walking up to my ball knowing that I can hit a good shot, and doing just that.” Abby Warren has a similar goal—to shoot under 60 on nine holes.

In order to support the team’s first year and all the associated costs of building a new sports program, the team has started an online fundraiser. As Abby Warren reminds, “golf takes a lot of resources. Equipment is expensive.”

“We are really appreciative for the local support we have received so far,” said Coach Warren, “It means a lot to support women’s athletics.”

For more information and to donate online, please go to: