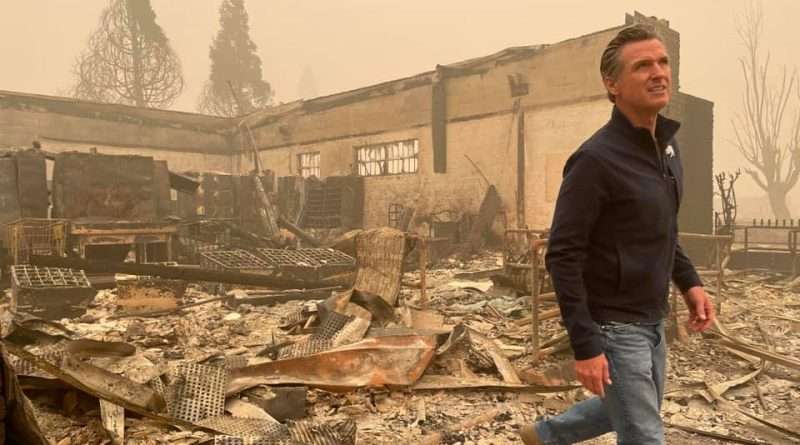 Gov. Governor Newsom visits Greenville on Aug. 7 to view the devastation himself and promised the state would help. Photo courtesy of Gov. Newsom
News
August 8, 2021 Editor

Local officials and firefighters met with Governor Gavin Newsom when he toured Greenville on Saturday, Aug. 7,  to see the devastation left in the wake of the Dixie Fire.

The mid afternoon meeting took place in front of the burnt out Greenville Post Office and lasted about half an hour. “He listened to our concerns,”  Johns said. “We told him what we needed as a county.”

While the state has issued an emergency declaration for the county, Johns is awaiting a presidential declaration that will allow more resources to flow in to the area, including FEMA trailers to provide temporary housing for fire victims. Johns said Newsom indicated that he didn’t see an issues in obtaining the presidential proclamation.

Johns said the meeting was very positive for the community. “He understands the problems we face and will work with us,” Johns said. He added that it was a low-key meeting and “not some big media operation.” Johns added that Newsom is familiar with the area because he recreates in the county, though not many people are aware of that fact.

CHP Lt. Erik Egide said he was notified of the Governor’s visit because the CHP provides security for Newsom in Sacramento and when he travels. Egide said the CHP has been working closely with the sheriff throughout not only this fire, but the Beckwourth Complex that ignited June 30. “It’s been a total team effort,” he said.

For his part, the Governor issued a tweet: “Spent the day in Greenville, surveying damage from the #DixieFire and discussing ongoing firefighting efforts … Our hearts ache for this town. Greenville—though this moment may seem insurmountable, we’ll be there to help you rebuild.”