The August Ace of Aces Qualifier was played on Aug. 26 along with the game of the day: Best and Worst. Each player deducted their lowest and highest per hole scores from the gross score. Then the handicap is subtracted from the balance. The Ace of Aces playoff will take place Thursday, Sept. 30. “Congratulations to the August Ace of Aces Qualifiers: Low Gross, Marla Garrett with a gross score of 96; and, Low Net, Cathe Franck with a net score of 71,” said club golfer Carol Miller.

By Mari Erin Roth Sportswriter [email protected] Lakeview Honkers fly over Portola Tigers, 22-13 PHS football staff had to do a… 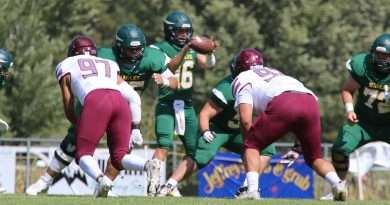 By Mari Erin Roth [email protected] The Feather River College men got the best of the Monterey Peninsula Lobos on Sept….