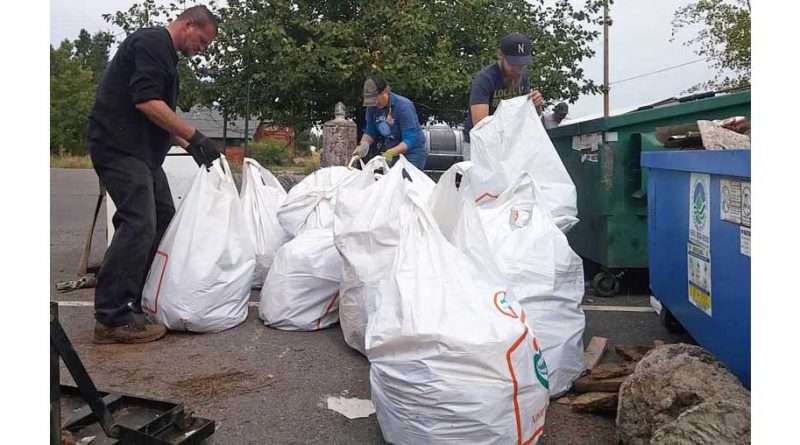 The Great Sierra River Cleanup is coordinated statewide by the Sierra Nevada Conservancy in association with the California Ocean Conservancy on the same day.

Volunteers assembled at 9 a.m. at the Westwood Visitor Center at the corner of Ash and Third streets, near the railroad tracks.

The Almanor Recreation and Park District, along with the Lake Almanor Watershed Group and the Mountain Meadows Conservancy sponsored the cleanup,

The concentrated effort included picking up trash along Highway 36 from Delwood Street to the Westwood Landfill.

Additional areas that were cleaned up included popular recreation sites in the north of town and along Robbers Creek.

Volunteers from Westwood, Chester and Lake Almanor picked up over a ton-and-a-half of garbage of all types along about 6 miles of local waterways.

A lot of recyclables like cardboard, glass and plastic were placed in a separate bin. Metal and tires were gathered, as well as appliances, which were all separated for pickup.

Thanks were given by Fulder and Slusher to Les Schwab Tire in Susanville, “for graciously accepting the 24 tires that were collected,” adding their appreciation to C and S Waste Solutions for the two bins that they donated for trash and recycling, as well as to the Westwood Area Chamber of Commerce, “for letting us use the center as a locus for the event.”

Fulder and Slusher wanted to include a special thanks to “all of the volunteers who went above and beyond to make this event a success.”

Fulder stated she was also appreciative to Feather Publishing reporters for “their fine coverage of the cleanup.”