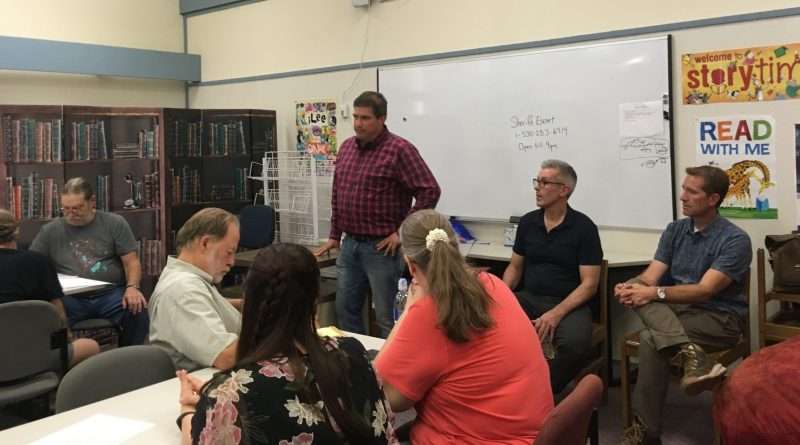 Greenville attorney Bret Cook, standing, addresses the crowd that filled the Quincy library meeting room on Tuesday, Aug. 17. His law office and home burned in Greenville, so he has joined with another law firm to help represent Greenville residents. Photo by Meg Upton
News
August 18, 2021 Editor

Nearly 40 people who’ve lost their homes in Greenville crammed into the Quincy Library Conference room on Tuesday night, Aug. 17, to listen to lawyer and Greenville local Bret Cook introduce the firm he is partnering with to file a mass tort lawsuit against PG&E for its part in the Dixie Fire, raging now for 35 days.

Cook lost both his law office in downtown Greenville and his family’s home. He immediately wanted to represent his community but knew without an office, the sheer volume of potential clients would be overwhelming. He looked around and found a firm—Potter Handy, LLP that aligned with Cook’s small town values and a decades-long family connection (Cook’s parents were longtime friends of lead attorney Bret Parkinson’s wife’s family).

“Our goal is to give each of you a choice of whether to rebuild in Greenville,” said Parkinson.

As various law firm representatives descend on Plumas County eager to find clients to litigate against PGE, this one, according to many present, was different.

This one was about one of their own.

“I can’t help rebuild without an office. I needed a firm. This one matched who we are,” said Cook. “My endorsement is that I’m also a client.”

The room was somber—rows of residents who may have sat at tables just like these months ago for the Pheasants Forever dinner, or another such Greenville tradition — now were grateful to see each other under different conditions. Now they ate pizza and asked questions regarding picking up the few pieces left of Greenville. They asked where each other was staying and asked after each other’s families.

After the initial introduction of the attorneys, the room was opened up for about a 40-minute Q&A session.

Most questions were based off of the Camp Fire’s destruction of Paradise and the PGE bankruptcy. The attorneys attempted to explain the differences of circumstances since that fire almost three years ago, including PGE’s federal probation and the AB1054 utility fund that has been created since PGE’s bankruptcy. Most questions centered around how long any litigated relief would take to get both insured and uninsured homeowners enough to choose whether to rebuild or not. And that’s a question no one can really answer yet.