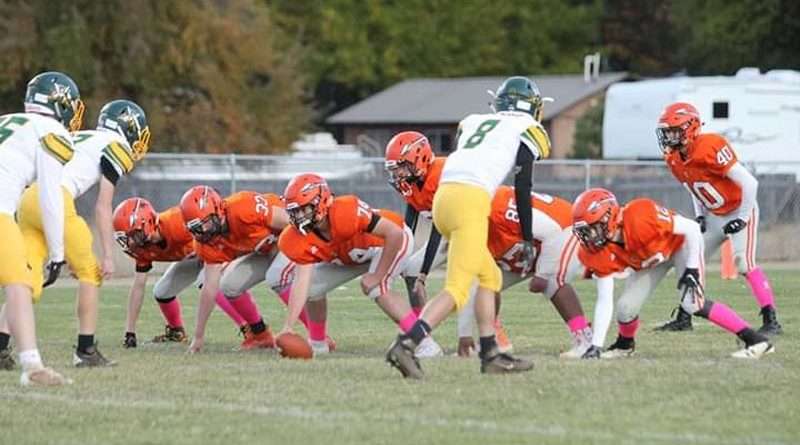 The final football game for the Greenville Indians was against the Redding Christian Lions.

Sixteen of Putnam’s 25 passes were completed for a total of 232 yards, averaging 14.5 yards per pass. Two touchdowns resulted from Putnam’s sharp aim to junior Trevor Barr.

Miille threw one pass, which was caught by Putnam, to pick up 27 more yards for Greenville.

Trevor Barr had a great night with eight receptions for total of 131 yards, including the two he carried into the end zone. Neer caught five passes for 71 yards. Savala caught two for 27 yards. Miille caught a pass for a 3-yard gain.

Senior Harlan Savala made three carries for 71 total yards rushing and scored a touchdown in the process. Miille carried the ball twice for a total of 97 yards. Putnam carried the ball two times for 18 yards. Sophomore Wade Neer had a single carry for 11 yards. Junior Kyle Hitson and senior Anthony Joseph also carried the ball for GHS gains.

Savala led in all-purpose yards, 144, adding a total of 46 yards with four kick returns. Putnam made a kick return of 8 yards and Anthony Joseph picked up a kick return for 5 yards.

“I am happy with the team’s performance this season,” said coach Keller. “For the eighth consecutive season, we made the playoffs. We’re one of the few teams in Northern Section to accomplish this feat.”

The Indians finished their 2019 season with an overall record of 6-5. They finished the California–South (8-man) league 4-3.

The Chester Volcanoes are among the seven teams sharing the league with Greenville.

The league teams are Chester, Burney, Princeton, Greenville, Herlong, Loyalton and Mercy, finishing the season in that order.

Chester won the final section championship this week with an undefeated season record of 13-0.