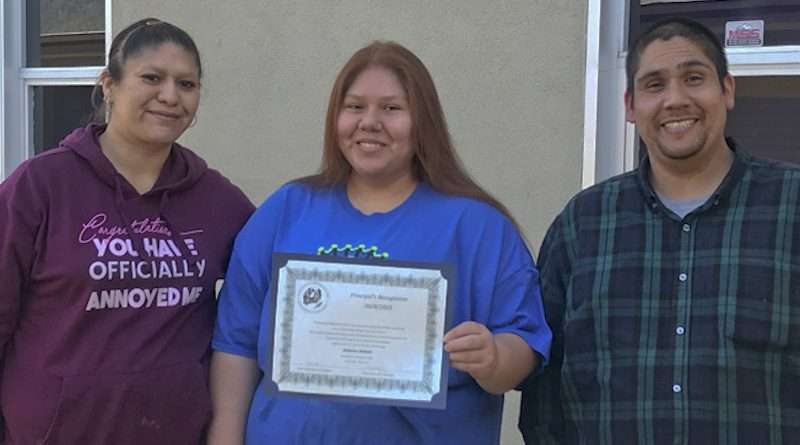 Greenville High junior Jenessa Jaimes, center, earned the distinguished Principal’s Recognition Award on March 10 during the PUSD school board meeting. She was honored and congratulated for exceptional dedication to her education and outstanding academic achievements. The student is seen here with her parents, Rita Merino, left and Brandon Jaimes. Photo submitted
News
March 12, 2021 Editor

Jenessa Jaimes, a junior at Greenville Junior-Senior High School (GJSHS), has overcome more personal tragedy in her young life than many adults have to face in decades of living and you could definitely say she has bloomed where she is planted.

On March 10, Jenessa’s academic accomplishments earned her the distinguished Principal’s Recognition Award and she was congratulated during a broadcast meeting of the Plumas Unified School District’s (PUSD) Governing Board of Trustees.

Superior dedication to her education

Logged on remotely to bestow the award, Traci Cockerill, the K-12 Principal for both Greenville High and Greenville Elementary School, enjoyed recounting Jenessa’s achievements for the school board.

“Tonight, I would like to present the Principal’s Recognition Award to Jenessa Jaimes who is a junior at our high school and the daughter of Brandon Jaimes and Rita Merino.”

Cockerill described Jenessa’s hard work, a superior dedication to her studies and a commitment to excellence that any family would be proud of. The student continually puts herself to the test with challenging subjects and a demanding course load.

With COVID-19 precautions still impacting local schools in the district, Principal Cockerill said, “Jenessa chose to go with the path of Independent Study for her schooling this year. She got her work done, often early and with good grades.”

Tragically, last fall, Jenessa and her family experienced two great losses at once — their home burned down and the student lost her grandfather too, all in one week. It was a great deal with which to cope.

Expressing admiration with a warm and encouraging smile, Principal Cockerill told the trustees the young woman “has excelled at her education in spite of these family challenges. In fact, Jenessa made the Dean’s List this past semester. And she even emailed her teacher on Christmas Eve needing assistance!”

Cockerill explained that the teacher appreciated Jenessa’s hard work and encouraged her to take a break and get back to her project in a couple of days.

Jenessa is also taking advantage of all that PUSD’s Independent Study program has to offer. For instance, students may earn credits for core content and electives they study through the district’s “Academies” that are available through approved online vendors. The offerings are identified as Apex Learning®, UC Scout and School Pathways® resources, as well as through further independent study and community college coursework.

“During this second semester,” the principal noted, “Jenessa has six core subjects on Apex, which can be very difficult for students.”

Cockerill added, the junior makes her weekly meetings (to check in with advisors) and if something comes up, she is sure to let her teacher know and reschedule.

“Jenessa is going to be very successful in whatever she endeavors to do, in anything she chooses to pursue,” Principal Cockerill said. “Greenville Junior-Senior High School is proud to have her as one of our top students.”

The Plumas County Unified School District and its County Office of Education trustees and administrators enjoy recognizing exceptional pupils who do well academically and also accomplish great things both in and out of school.

The Principal’s Recognition Award honors outstanding students who display the characteristics that PUSD’s governing board promotes in its mission statement and within the vision adopted for Plumas schools and students countywide.

Each school chooses to award a student for demonstrating personal achievement. The honor recognizes students for developing the skills necessary to be self-directed, productive and responsible citizens.