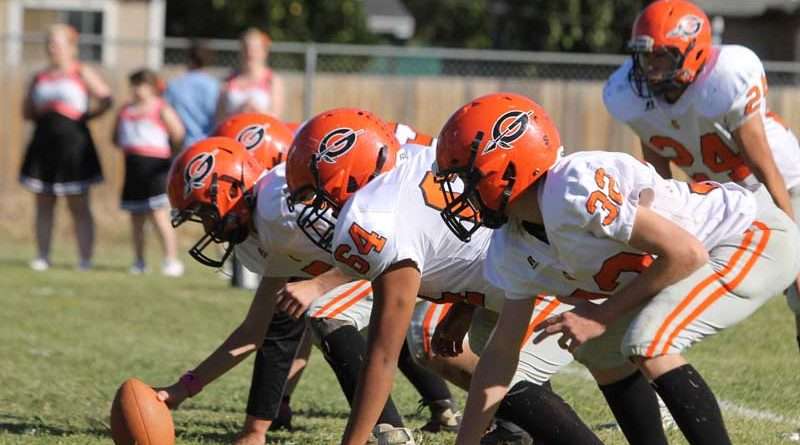 The Greenville Indians showed no mercy for the Warriors Oct. 14 when they racked up a winning score in Red Bluff, 50-9, in front of a stadium full of Warrior fans.

Tristan Clark really put on some mileage as he rushed 249 yards for the Indians. Isaiah Hilpert rushed 117 yards plus 21 receiving while Alex Tassone rushed 48 yards, had a kickoff return of 36 yards and a punt return of 31. All together, the Indians forged forward a total of 484 yards to the Warrior’s 271.

Tassone sacked the Warrior quarterback twice. Kyle Hitson and Harlan Savala each sacked the quarterback, too. Hilpert had two interceptions, Colton Lawson had one.

Sophomore Hilpert scored three touchdowns, Clark two and Tassone and McIntosh each carried the ball across the goal line to score for the Indians. Two-point conversions were completed by Aaron Mecum, Clark, Lawson and Hilpert.

The Indians played the Vikings under sunny skies in Herlong Saturday and won by a score of 58-8. The Indians didn’t allow the Vikings to score until the last quarter of the game and scored a whopping 36 for GHS in the first quarter.

Junior quarterback Tristan Clark collected 224 yards — 107 passing and 117 rushing. Sophomore Isaiah Hilpert had 47 passing and 169 rushing for a total of 216 yards. Junior Colton Lawson was the lead receiver with 121 yards.

Leading the defense was senior Alex Tassone with 11 tackles and two quarterback sacks. Junior William McIntosh had 10 and Hilpert contributed six. Freshman Lloyd Roath got in a quarterback sack.

Lawson intercepted, taking 36 yards away from the Vikings while McIntosh captured the ball away from Herlong twice for a combined Viking loss of 28 yards.

The Indians are having a terrific season at 6-2 overall and 4-1 in league play. The last game of the season for the Indians is this Friday, Oct. 27, in Greenville against the Loyalton Grizzlies at 7 p.m.