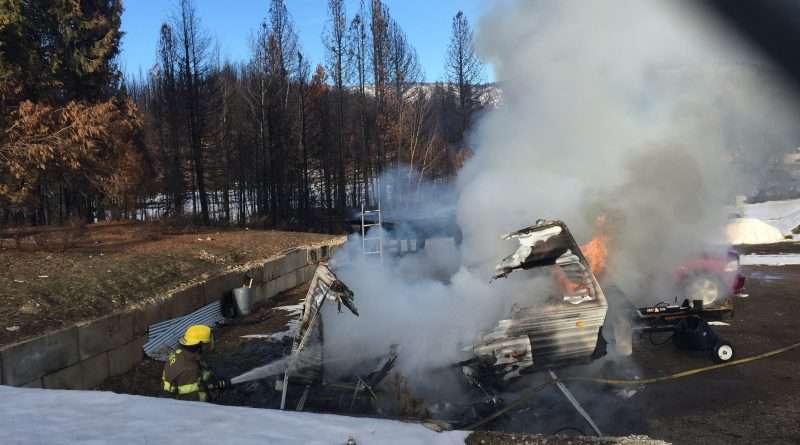 Indian Valley Fire was able to quickly knock down the blaze which erupted Saturday afternoon, Jan. 15, in Greenville, but a body was found inside the trailer. The body is being positively identified through dental records. Photo submitted
News
January 17, 2022January 20, 2022 Editor

The Plumas County Sheriff’s Office confirmed today that an individual died in the trailer fire Saturday, Jan. 15 in Greenville. Investigations Sergeant and Chief Deputy Coroner Steve Peay said the body discovered in the burned trailer is undergoing an autopsy and that the victim’s identity will be confirmed through dental records. While many in the Greenville area are aware of who had been living in the trailers, but his identity has not been confirmed.

Firefighters responded to the scene of the fire on Wolf Creek Road and Main Street in Greenville Saturday afternoon. It appeared to have started in the trailer and then spread to shed and a truck. (The trailer was not one provided by the state for Dixie Fire survivors.)

A witness said she heard a strange sound and then saw white smoke, quickly followed by flames and then black smoke.

Once firefighters arrived, they were able to quickly knock down the fire. Two fire trucks, a water tender and an ambulance responded to the call.