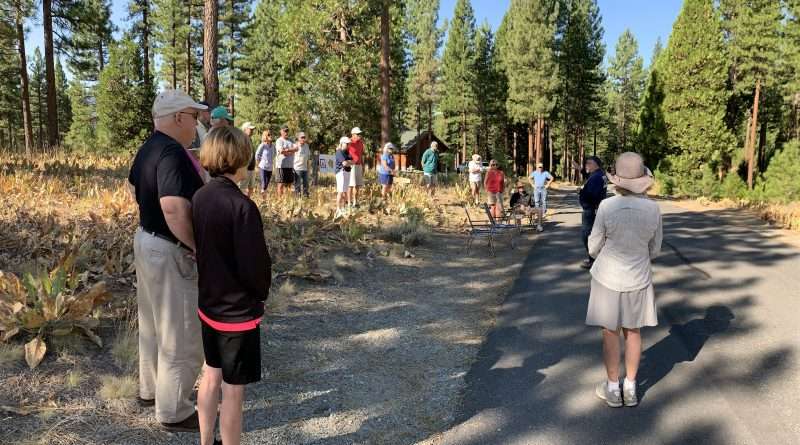 Members of the Grizzly Ranch Community get a pre-exercise briefing on the wildland fire exercise from the Beckwourth Fire Department. Photo by Sue McCourt
News
August 18, 2020August 19, 2020 By Sue McCourt

Residents at Grizzly Ranch got a first hand look at how the Beckwourth Fire Department and the U.S. Forest Service work together in their firefighting efforts. On Sunday Aug. 9, the Grizzly Ranch Firewise Group hosted its annual Firewise Educational Day in conjunction with a fire training exercise with the fire agencies.

Twenty five residents came to hear what they can do to be better prepared for fires. This year’s topic was an interagency wildland fire training that was focused on a structure fire that spread to a wildland fire.

Residents were able to observe the training exercise first hand at one of the homes in the community. They were able to see what it looks like for firefighters as they arrive at a fire, assess their firefighting needs, develop a strategy and what each agency uses to put out a fire. After the training exercise, members of the community got to meet their local firefighters and ask questions. Beckwourth Chief Bret Russell and Plumas National Forest Captain Joel Bronk shared their insights in to the challenges they encounter while fighting any fire that occurs during the summer wildfire season. There was much discussion about embers and how important it is to pay close attention to maintaining 100’ of defensible space, particularly the first 5’ from the home.

Firewise Leader John Reynolds followed up the discussion about having your personal evacuation plan in place and “Go Bags” were handed out to members of the community so they could put together their own personalized kit. John told members of his community, “It’s important that everyone have a plan, know their evacuation route and be signed up for CODE RED Plumas County’s Emergency Alert System.”

I had an opportunity to speak with Beckwourth Fire Chief Bret Russell following the event. He had just returned from the Loyalton Fire where he and other Plumas County fire departments, as well as Plumas National Forest fire engines were sent to provide structure protection. “We experienced extreme fire behavior, including the fire tornado which came close to where we were protecting structures from the oncoming fire. Firefighter safety was our number one priority, as it always is. Just as we emphasized to the residents of Grizzly Ranch, every person living in a wildland area must do their part to prepare their house for wildfire,” he said. “We are faced with quick decisions as to which homes to protect due to limited resources on fast moving fires. Homes that have been prepared for wildfires with defensible space make a much safer place for firefighters to make a stand. Embers can ignite multiple fires at the same time around these homes. We all need to have an understanding of embers and how they can ignite small things that become big things very quickly.”

Grizzly Ranch is one of Plumas County’s 21 nationally Firewise Communities. Certified in 2015, they have been working with members of their community on defensible space education and fuel reduction and tree thinning throughout the community. Along with tracking the hours of work invested in the community, this fifth annual Firewise Education Day completed the needed requirements for annual re-certification as a nationally recognized Firewise Community.

For more information on your wildfire preparedness plan go to readyforwildfire.org and plumasfiresafecouncil.org.