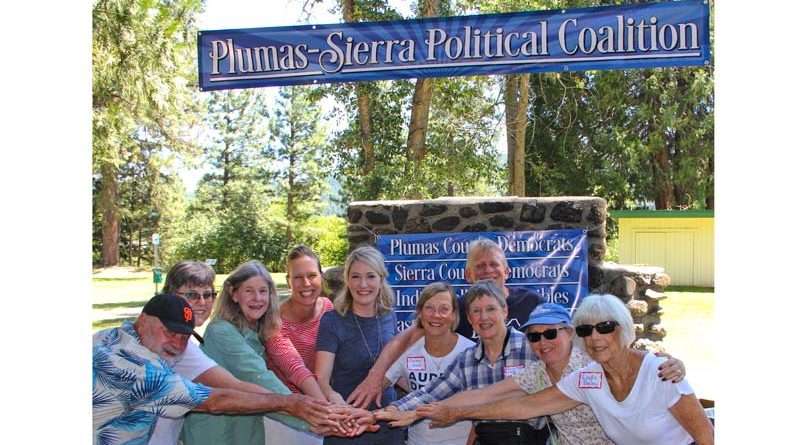 Nearly 100 attendees met two 2020 political candidates at a picnic July 13 in Quincy’s Gansner Park. Sponsored by the Plumas-Sierra Political Coalition, the event was hosted by several local organizers. From left were Dan Wilson of Portola with Eastern Plumas Indivisibles; Sierra City’s Cindy Ellsmore with Sierra County Democrats; and Quincy’s Faith Strailey, Chair of the Plumas County Democratic Central Committee. Next are Elizabeth Betancourt who is running for the state assembly and Audrey Denney who has launched a new run to challenge incumbent Congressman Doug LaMalfa. Also on the picnic’s list of sponsoring organizations were Davney Gasser of Quincy; Jason Christian of Portola; Marsha Roby from Greenville’s Indian Valley Indivisibles, Graeagle’s Zoe Byrd; and Genesee’s Linda Bailey. Not available for the photo was Sierra City’s Sylvia Lopez. Photo by Roni Java