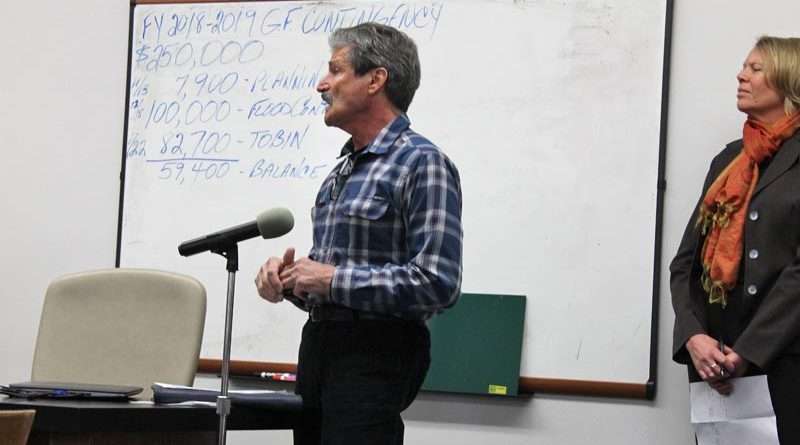 Master gardener and member of the Plumas and Sierra Counties Community Food Council Paul Mrowczynski addressed members of the Plumas County Board of Supervisors on March 5. He and others who are involved in the food council updated supervisors about local accomplishments and continued goals as they push for more involvement in growing and raising food for local consumption. Photo by Victoria Metcalf
News
March 19, 2019March 14, 2019 Victoria Metcalf, Assistant Editor

What could be better in Plumas County than eating fresh vegetables from one’s own garden — eating them from someone else’s.

Encouraging residents to become farmers and gardeners, use of local produce and livestock, and getting it to residents who want to eat healthy, locally grown food was part of a presentation by some members of the Plumas and Sierra Counties Community Food Council.

The presentation was made at the regular Plumas County Board of Supervisors meeting Tuesday, March 5.

The mission of the community food council is “to increase community resiliency by fostering vibrant local agriculture and increasing access to healthy food for everyone in the Plumas-Sierra region,” Paul Mrowczynski explained to supervisors in a pitch to update them on what’s happening with local food production and efforts to get residents and groups involved.

The organization’s mission is also “to improve community food security through advocacy, policy, and grassroots programs that shape the region’s food system and the health of its residents,” Mrowczynski explained. He’s a long-time Plumas resident, a registered nurse by career, a member of the council and a master gardener. He and his wife are also avid gardeners with SnowSki Gardens in Meadow Valley.

The council is comprised of volunteers, master gardeners, farmers and local agencies and departments, Mrowczynski explained.

It’s a shared goal of these individuals and organizations to see people produce their own food, but also to share it with those who don’t have the means or the skills to raise their own.

“The idea is in small rural counties that we don’t have as many layers of bureaucracy to get through,” Mrowczynski explained about the process.

It was less than two years ago when members of the food council conducted the FEAST — Food, Education, Agriculture, Solutions, Together — summit and chose three goals to accomplish in three years, Mrowczynski reminded supervisors.

The first one, and one they continue to work on, is to increase food access for all Plumas and Sierra county residents. Mrowczynski said they have a solid partnership with members of the Sierra Valley Food Guild. Although that organization sets its own programs and has its own membership, they have common goals.

Mrowczynski said that the food council is also interested in seeing Chester/Lake Almanor people involved in the program. Although that area has a very short growing season there is a lot of information and “know how” behind extending the growing season.

A second goal is to increase collaboration with ranchers and farmers throughout the two counties. These are frontier counties, Mrowczynski said, not rural in classification. This identification is based on local hospital status, he explained.

Sierra County has long been considered a frontier county based on the number of people it has per square mile. Plumas County has been considered a rural county. But in checking with rural health information the census at local hospitals can also be used as a determinant.

This determination in status gives the two counties yet another reason to partner.

And the third goal of that summit is to develop community gardens for families in the two counties.

Portola has a good start on this goal. Its schools, like those in Quincy, Chester and Greenville, are also using the garden as an educational tool.

In speaking about schools, Mrowczynski pointed out that, with the help of the USDA Farm to School Planning Grant, “PUSD approved a five-year sustainable plan for elementary school gardens on Nov. 9, 2016.” This funding assists all four elementary schools in sustaining the gardening programs, he said.

When PUSD Food Services Manager Amber Russell took a turn explaining the schools part of the program, she said that they have increased their purchasing of locally grown produce and meats.

Milk for PUSD schools is purchased from Morning Glory Dairy in Susanville.

The budget for local produce has increased from two percent in 2016 to 12 percent last year, according to Russell. The five-year plan is to increase expenditure on local meat and produce to 25 percent in 2020. In terms of actual dollars, Russell said that the district has spent about $20,000 with local producers.

The curriculum for the gardening programs is supplied by the Plumas County Health Agency, Russell explained.

And when the schools received a California Grown Healthy Meals grant there is funding for the purchase of any equipment including dehydrators and gardening supplies and tools.

Graeagle chef Sean Connery has also been instrumental in providing advice on culinary tips and demonstrations.

Healthy eating habits are also part of the food program. That week, the food item of note was spinach and its benefits, according to Russell. This also fits under the PUSD’s wellness policy.

Russell explained that, through its efforts and additional PUSD funding opportunities, last year the schools served 1,200 meals and this year it’s up to 1,700.

This is a 10-unit certification program that also has students involving themselves in four to five additional electives toward completion.

DeRuiter worked in partnership with the Community Action Agency to help develop a program that would teach individuals how to become gardeners and farmers. The intent is to give residents opportunities to raise their own food and grow it for others.

“Food is something we all have in common,” DeRuiter explained as she took a turn addressing supervisors. “Hopefully, everyone of us in this room get to eat” every day, she added.

One of the major areas of concentration in the farming certification program is teaching people how to extend the growing season. Plumas County has a short growing season with a late spring and early frost. Some parts of the county can anticipate an even shorter season for food production. There are a variety of ways that growers can continue the season long after frost and sometimes through the winter. Crop choice and growing conditions are often key.

Jessie Mazar is the instructor. She has a master’s in food systems from the University of Vermont. She’s also taught a college program called “Rethinking Food Security: Agriculture, People and Politics” in Tanzania, India, Italy, Ecuador and Malawi.

Rich Leonhardt, a Quincy area rancher, teaches a business class as it relates to gardeners and farmers in the farming certification program, DeRuiter explained.

Laura Rodriguez and Ann Bullard are the owners of follow Your Heart Farm where actual hands-on gardening and farming practices take place. The farm is noted for its produce, fruit trees, hogs and chickens.

This takes place usually on a Saturday in August and involves local producers who are willing to open their gardens and/or farms to the public during the farm crawl. “We want to inspire and encourage folks to help with their sustainability by growing some of their own food,” Rodriguez said in an overview of the short history of the group.

The first farm crawl was organized in 2016 with four participants, she said. Visitors from as far away as Santa Cruz attended the event. In 2017, a memorable couple attended from Nevada — they included the tour in their honeymoon plans, Rodriguez said.

Last year, nine participants were involved in the event. They included growers from Greenville, Indian Falls, Quincy and Meadow Valley, and received up to 100 visitors.

Rodriguez would like to see the event include gardeners and farmers from all parts of Plumas County. She said she envisions it turning into a two-day event.

This year’s farm crawl is slated for Saturday, Aug. 3. Donations are always welcome and help the farmers’ guild.