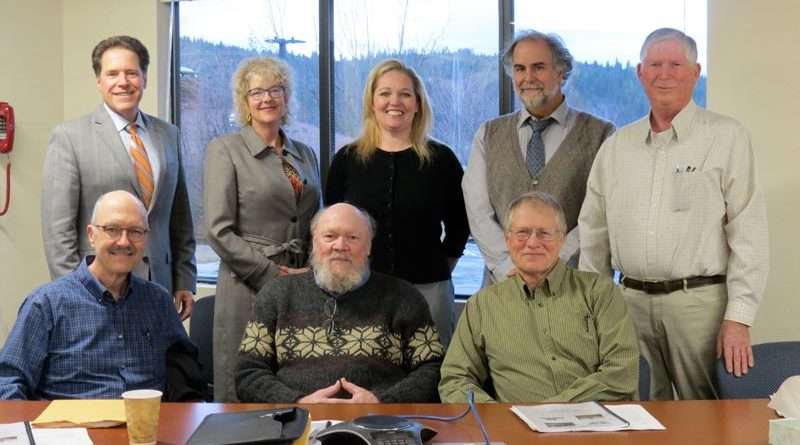 It’s official the Plumas and Indian Valley health care districts have united. The final documents have been signed and the new board members seated Jan. 8.

“This is a momentous day for all of us,” said Flanigan, who served as Plumas Hospital District’s board president through the process of uniting the two districts. “It’s a big dream come true.”

She worked closely with Guy McNett who was the driving force for Indian Valley in the effort.

“I’ve wanted to be a part of this organization for a long time,” he said.

His Indian Valley colleague on the board, John Evans, said, “I’m humbled by the qualifications of the people that I’ll be working with.”

Evans was elected to serve as secretary to the board in 2020, and Dr. Mark Satterfield became president of the board, succeeding Flanigan.

Flanigan also recognized the work of district CEO JoDee Read (formerly Tittle) for her assistance throughout the process. “She made it easy for me,” Flanigan said. She also recognized former CEO Dr. Jeff Kepple who was in the audience for his initial work on the unification.

Care Flight has been busy — not only transporting patients via ground and air — but also logging 5,000 hours in the hospital’s emergency room.

Care Flight Operations Manager Matt Brown presented his annual report to the board for the period ending June 30, 2019. Normally, the presentation would have been made sooner, but Brown said his group has been busy setting up shop in Greenville as its new ambulance provider.

“We did 672 transports last fiscal year, which will go up this year with the addition of Indian Valley,” Brown said.

Care Flight continues its efforts with its Heart Safe community designations. Quincy already has the designation, and Brown said that Indian Valley is targeted for this year.

To that end, board member Andrew Ryback said that Plumas Bank would purchase an AED for its Greenville branch. Care Flight is taking inventory of existing defibrillators in Greenville and estimates that there are just a few. Quincy has about 30 devices.

Care Flight has also conducted 127 CPR classes and certified 1,044 citizens. “That’s a lot of folks in a town the size of Quincy,” Brown said.

Additionally, Care Flight personnel have assumed the job of sitting with 5150 patients when they are in the hospital. The county discontinued the service last year, leaving hospital staff scrambling to fill that void. In a five-month period, Care Flight logged 223 hours in that role.

Care Flight also purchased transport ventilators for its ambulances and arranged for $20,000 worth of supplies to be distributed to volunteer fire departments throughout the county.

Space is at a premium on the hospital campus, which also houses its two clinics and an administration building, so offices and staff have been relocated to streamline services.

The move includes taking the coding and some of the billing staff offsite, freeing up more space. Billing staff that interact with the public will remain on the hospital campus.

Darren Beatty, the district’s chief operational officer, said that a scope of work for the daycare center is being developed and it’s hoped that it will go out to bid in February and be before the board in March. The district purchased a home adjacent to its campus to renovate into a daycare center.

“This is not going to be inexpensive,” Beatty said. “It’s an investment. We’re hoping it will retain staff and improve productivity.”

It’s not been determined whether the hospital will lease the space to a daycare center operator or run the daycare and hire staff.

“It could be a good business,” Beatty said.