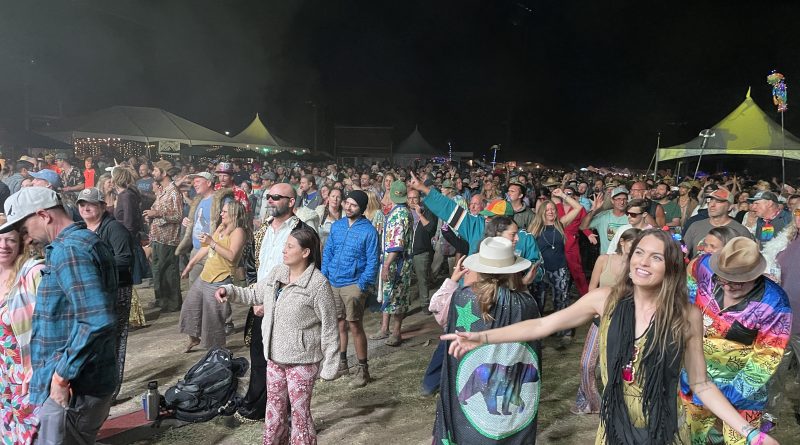 Thousands of music lovers flocked to Quincy for the biggest festival in the Sierra Nevada mountains June 30-July 3, High Sierra Music Festival. The migration has been on hiatus, but was back in full rainbow colors for the 2022 July 4th weekend.

“We are beyond thrilled to return to Quincy after three long years to celebrate 30 years of High Sierra Music Festival,” said festival spokesperson, Rebecca Sparks. “The entire festival community from the fans to the musicians and vendors and staff have really missed coming together, and have missed Quincy.”

The town population was 1,630 in the 2020 census and the sign coming into town says 5450, which includes various surrounding areas, but the population more than doubles that during the annual festival. There were approximately 7,000 attendees at the last gathering in 2019. There have been banner years with as many as 15,000 music lovers getting into the Quincy-vibe during the three-decade history of the festival.

Town folk endure the swell in population as the surge brings in enough business to carry some local stores into the black for the year. “I love what the festival does for the town,” said longtime Quincy resident Jacky Trotter. “I’ve never been to the festival but I love the energy that comes with it and I know the revenue is good for the businesses.” Crowd-intolerant locals wander to Bucks Lake or other cool spots while the visitors fill restaurants and empty grocery stores over the weekend. It’s hard to beat the entertainment anywhere around town for people watching. Music “festies” bring their most colorful outfits and wildest behavior for the weekend and the Sheriff’s Blotter is generally packed with entertaining items. Mostly harmless shenanigans take place during the 4-day campout at the Plumas Sierra Fairgrounds.

This year, five lucky locals won weekend passes to the festival on KQNY radio from their “Engine Driver” Quigg on the Independent Track. Quincy fans Carol Smith, Diane Irving, Mark Serumgard, Katie Simpkin, and Dave Kintader all benefited from listening to their local radio station. Along with discounted prices for locals, HSMF promoters donated the giveaway tickets months before the scheduled event while still shaping the lineup. “We know it’s been a hard few years, and we were especially devastated for the county last summer, but we’re back and looking forward to a fantastic weekend of great music, family, friends and good times!” said Sparks.

The schedule of performers for High Sierra is always spectacular with multiple stages playing at one time. Big Meadows, Vaudeville and Grandstand are the big outdoor venues. Concurrently, indoor performance “playshops” take place in the cool of the Music Hall with its huge expanse and polished concrete floor. In the evening there are Funk’n Jamhouse late night shows until the wee hours (3 a.m.) and the Troubador sessions where artists from various bands take turns talking and playing their music for an intimate crowd of 75 starting at midnight. Big names in 2022 included Peter Rowan & Railroad Earth, The Floozies, The Slip, Spafford, The California Honeydrops, Cris Jacobs, Steve Poltz, Lindsay Lou, Scott Pemberton, Pigeons Playing Ping Pong, Samatha Fish, Greensky Bluegrass, Lettuce, Twiddle, Skerik & The True Loves, Orgone, and many, many more. The festival is literally jam-packed with music.

The mornings begin with the locally produced Grizzly Radio show “Morning Sushi” where anyone can have their 15 minutes of fame singing for their breakfasts. Performers are gifted with free food coupons for a 15-minute set aired live on Grizzly Radio 7:30 a.m. to 10:30 a.m. At 9 a.m., dozens of festies gather for morning yoga and meditation on the big lawn. The hour wake up is followed by a series of dance fun workshops until early afternoon giving the crew time to open their eyes and hearts to the day’s upcoming experiences. Organic food, micro-beers, expensive clothing and jewelry vendors line the Grand Stand area for perusing all day and night. Aromas of fine spices and scents Palo Santo wood waif through the air. Creativity abounds in home made costumes with HSMF providing themes for each day. Colorful hulu hoops spin day and night along with the most spectacular hand-held lighting apparatuses. Sitting on the sidelines watching is a full experience in itself, but there is a daily parade that is eye-candy for any camera. Dragons, butterflies, and stilted Quircus locals bring it all to the table during the drum-beating cavalcade that wanders like a snake through the food court to culminate on the big lawn. Children and families are embraced at the festival and so many of the activities are designed to bring out the “kid” in everyone.

During the 2022 festival Mark Serumgard said it wasn’t the reason he was looking forward to High Sierra but the side benefit has been connecting with all the Quincy people that he and Jen (McQuarrie) haven’t seen really since Covid cut socializing down to a minimum. “It’s just been really great seeing Quincy people and hanging out.” Diane Irving said, “Honestly, I’m looking forward to seeing all the vendors.” And there is plenty of that. The most artistic of banners fly advertising clothing, jewelry, hats, all kinds of costumes and capes, and toys! Drawing customers in can be a challenge with so much serious competition. Free food and music is offered at the Shabbat Tent where smiles are contagious and there always seems to be a party going on. Who knew God could be so fun? Gluten-free pasta, vegan grub, and a little drop of wine (or grape juice) add to the celebratory mood. The group (shabbattent.org) is based in Los Angeles but has already hosted similar tents during the 2022 festival season in Coachella, Chicago, and at the Rainbow Festival this year. Religious services have stopped since Covid except for holidays, but in the world of summer festivals, the show must go on.

The 30th anniversary looks to have been a big success. The crowds at shows were large and enthusiastic. The weather couldn’t have been more perfect, clear, warm days, cool at night, minimal wind, and no rain; it was ideal. Everything felt normal, better than normal actually, because there was a real appreciation for what has been missed the past three years during Covid. Then there was the fire. And here we are, listening to music and loving life. Ain’t Plumas County grand? Plumas Strong. Live long and prosper.

So, until next year, High Sierra will be a memory of taste, sight, sound, touch, scent and that other one, the sixth sense that can’t be named. Each year is followed by a commitment to arrive earlier, stay later, participate more, dress up more extremely, and soak it all in. I guess that’s the sign of a really great festival, the one we already look forward to next year!