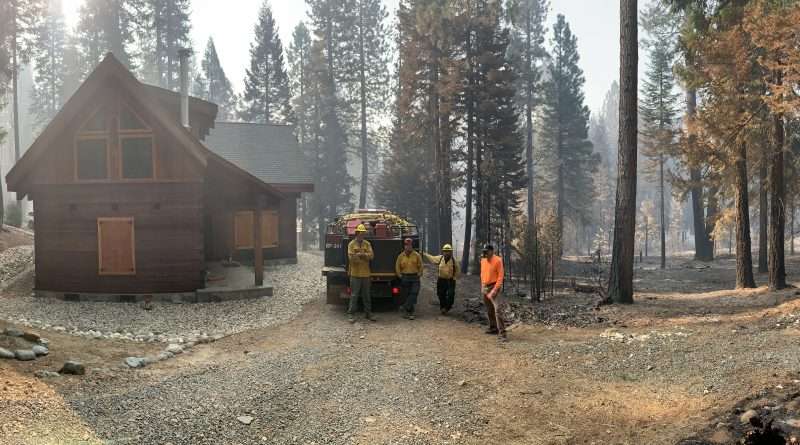 Editor’s Note: In this article, Historian David F. Matuszak tells the story of how Nelson Point has been ravaged twice by fire — first in 1924 and again by the Claremont Fire. While the first is from a historical perspective, the second is from his personal experience.

Nearly 100 years after the first major fire ravaged the historic Nelson Point mining community, wiping it off the map, Nelson Point has survived a second fire—barely. The Claremont Fire, sparked by lightning on the morning of August 17 in the vicinity of Little Volcano near the confluence of Nelson Creek and the Middle Fork of the Feather River, burned its way through a significant portion of the community of Nelson Point.

Founded in 1850, Nelson Point was once among the most prominent gold camps in Plumas County. Thousands of miners once lived there, but by the turn of the 20th century few remained. The centerpiece of the mining district for decades was the Pauly Hotel, located on the point across the river from the “Red Bridge.” Mail was delivered there, even a telephone was installed in later years. Miners sold their gold there that was weighed in a large scale near the front door. In July of 1924, the fire began, sparked by a campfire at the Nelson Creek Bridge. On Thursday, July 31, 1924, the Bulletin reported:

For a time Wednesday afternoon the Nelson Point hotel was in extreme danger, the structure being saved from the flames only by backfiring and constant wetting by bucket brigade. The hotel is owned and operated by Mrs. Kate Pauly who, with O. Moncur, father of J.O Moncur of Quincy, were the only occupants when the fire started.

The following day’s edition of the paper explained how fire pathways are so hard to predict:

Another landmark of the early pioneer days, the Nelson Point Hotel, 12 miles from Quincy on La Porte Road, has passed into history…

[B.F.] Pauly says the flames would jump a half mile when some cinder carried by the wind would light in the dry grass or pine needles. The men fighting the fire were helpless to do anything and in some cases it required quick action to avoid being enmeshed by the flames and burned to death.

Wednesday evening and Thursday morning, Pauly says, the hotel was apparently in no serious danger, then a change in the wind swept the flames rapidly to the hotel. Mrs. Pauly had made preparations to evacuate the building but seeing the fire receding began to think the structure was safe. The sudden change in the wind required quick action to get Mrs. Pauly out of the hotel and but little of the contents were saved…

During the progress of the fire in the vicinity of Nelson Point four automobiles were destroyed, including a big Hudson belonging to J.P. Crumpton, a mining man; also Messrs Whitney. Hughs and James each lost an automobile. These are all mining men who were working in the neighborhood.

In his classic history of the pioneer gold camp, which this account is taken from, “Nelson Point: Portrait of a Northern Gold Rush Town,” David F. Matuszak blames the loss of the Pauly Hotel in the ‘24 fire for the demise of the community of Nelson Point.

Today, Nelson Point is comprised of a dozen or more full-time and seasonal residents, mostly centered in the vicinity of the historic Willow Ranch on La Porte Road. The historic gold-rush-era ranch once produced hay, produce, and livestock for what was then referred to as the Nelson Point Mining District, an area spanning from Nelson Creek to the Willow Ranch. When the gold played out, the boom town waned. The Pauly Hotel, a schoolhouse near “Red Bridge,” the old Eggbert store/saloon across from the Willow Ranch, and the Nelson Point cemetery, were the last remnants of Nelson Point. All but the cemetery were destroyed decades ago and the name Nelson Point had nearly been forgotten were it not for Matuszak’s revival efforts.

Matuszak, who came to Nelson Point in 1981 to prospect for gold, purchased a small portion of the Willow Ranch nearly 30 years ago. He toiled for 14 summers to build a traditional hewn-style log cabin there, finishing it last year. Recognizing the effects of global warming on the forest during the past couple of decades and the increased potential for fire, the historian and retired teacher began to protect his cabin first by undergoing a forest thinning program operated by the Plumas County Fire Safe Council. Matuszak explained, “My hat’s off to Hannah Hepner, the program coordinator! The work that she and forester, Kyle Felker, did with the planning and implementation of a mastication process was critical to saving my cabin and minimizing the forest damage on the Willow Ranch. By clearing ‘ladder fuels,’ the fire swept under the canopy and spared most of my trees.”

Following the mastication program, Matuszak then agreed to coordinate a new Firewise Community, naming it after the historic mining district. In June, he toured the community with fire officials, McCourt, Hepner, and Ray Torres in order to develop a “Risk Assessment” for the area. The Nelson Point historian explained, “Were it not for the assistance of McCourt, Hepner, and Torres in developing our community and the training they supplied me, again, my cabin would likely have been lost. In particular was the advice I received to retro-fit all my vents with the new fire-resistant standard 1/8” mesh screens. Funny thing is, I bought the materials in July, but never installed the screens.

“So, on August 18th I was in Baja to surf. I had just arrived and before I even got my surfboard in the water, I got a call informing me that a fire was burning towards my cabin. I turned around and drove 48 hours back to Nelson Point, arriving on Thursday the 20th. So, when I drove up La Porte Road, the fire had already spread from Little Volcano and was already burning down to the pavement near the junction of the Fells Flat Road. Structure protection units were effectively steering the flames away from the houses all along the roadside in our community. At that point, the road and the meadow separated my place from the fire. So, I spent that day assisting firefighters in our community. A portable water tank was already in place at my cabin where firefighters were pumping water out of the meadow drain-pool to replenish their trucks. Luckily, my neighbor, Eric Hamlin, told them where the water source was. I started up my well and supplemented their newfound water source with mine.”

By late afternoon, the fire was burning toward East Quincy and threatened to jump La Porte Road at the Thompson Creek switchback. Matuszak continued, “By about 4 p.m. the firefighters told me I had to leave or I would be trapped on the mountain. Most importantly, I had carved out a couple of hours to retro-fit those vent screens on my cabin and garage. They may well have saved my structures. When I left, the fire was not threatening my cabin and the firefighters were confident that my place would be safe. But, I kept thinking about the 1924 fire. I remembered how Mrs. Pauly let here guard down before the fire changed direction. I was confident that firefighters could stop the fire from the direction of the meadow. But, I was concerned about the fire flanking them.”

Matuszak evacuated to Reno to evade the smoke, living in his camper for nearly 10 days. There he found wifi access and through email, internet, and by daily phone calls, especially with evacuated neighbors Julie and Tom Holden, he gathered information and relayed it to the members of his Firewise Community, keeping them apprised of the course of the fire.

“It’s the not knowing that’s so hard. The satellite heat sensitive maps were particularly useful in tracking the fire’s progress,” he explained, “ By the 25th, I thought we were out of the woods. But, I kept watching the backdoor. Then I noticed two new red dots on the heat map in the area of my cabin and the Dettman place on the other end of the Willow Ranch. Those red dots on the edge of the meadow indicating severe hot spots worried me. I feared my worst nightmare was materializing, the firefighters being flanked and the fire following the Willow Creek bed up the hill from the Middle Fork. What I eventually discovered on September 2nd when I finally was allowed to go back to my cabin, was that the fire had jumped both the road and meadow, burning uphill from the direction of the river. It came in from the back door and burned right through my place. I came back to what looked like a war zone. It was my birthday and the heroic efforts of the firefighters resulted in my best present ever—the saving of my cabin. All around is near total destruction. The fire was so hot, that it burned my forklift right down to the ground, melting the tires off the wheels. It even melted the top-end of the engine. In the ’24 fire, the miners lost their automobiles. I left the keys in my Toyota truck which enabled the firefighters to drive my truck to safety. During my evacuation drive down the mountain, I thought about turning around and leaving the keys to the forklift, even though the firefighters assured me it was in a safe place. But, it’s an old-timer and I didn’t think they would know how to run it and put themselves in jeopardy trying to save it.”

Because of the previous forest thinning, the forest burned below the canopy and most of the trees in the affected area will likely survive. The area from the meadow downhill on La Porte Road for some distance beyond Lost Cabin Road, not treated, was totally destroyed. “That was the direction the fire burned towards me and that blew up the fire into the inferno that swept through my place nearly taking everything in its course. I can’t begin to express the gratitude I have for the firefighters, Sue McCourt, Hanna Hepner, Kyle Felker—all those who contributed to the protection of a legacy cabin project that my family and friends will now be able to continue to enjoy. There were crews up there from all over: Ventura, El Dorado County, Montana, from all over the country. They are men and women who come in and save your place and move on to the next fire without ever being fully recognized for their work. They saved all the homes in our community, losing just one out building. To everyone of those unnamed heroes, I say thank you on the behalf of the Nelson Point Firewise Community!”

Matuszak further professed the virtues of being fire wise by encouraging everyone to seek out information about fire prevention via the Firewise U.S.A website, “We’re just entering the most dangerous part of fire season. This is our new reality of living in the forest and it will be like this for generations to come.” But at least for now, the community of Nelson Point has survived another encounter with the wrath of mother nature.