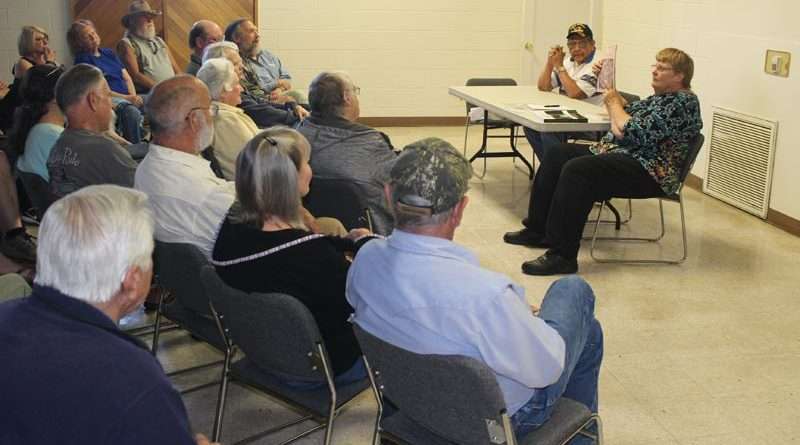 Chester-Lake Almanor Museum Director and local historian Marilyn Quadrio holds up a booklet that was produced by the Plumas Unified School district working with native Maidu back in the late 1970s, during the History Night program June 27 at the Veterans Memorial Hall in Chester. “I try to offer examples of books offering a basic knowledge of native culture and background on the way they lived within the environment,” Quadrio explained. Photo by Stacy Fisher
News
July 10, 2019July 17, 2019 Staff

Mullen, a descendant of Big Meadows Maidu, presented an overview of elements of Maidu culture and history, including the role of healers; traditional beliefs; conflicts with the “Mill Creeks” or Yahi and Yana peoples; and the difficulty in maintaining Maidu spiritual beliefs as they lose the elders who are the last native speakers of the Maidu language.

The traditional form of the annual spring Bear Dance is changing, but not the Maidu love of gaming.

Mullen shared his own gaming pieces, made from deer leg bone, as he described the “Grass Game,” and told his audience about the modern version now played in many Indian casinos.

Following a discussion of the forced cultural assimilation practiced in government-run Indian schools around the country, Mullen entertained his audience with tales of his own assimilation into the U.S. Marine Corps at the end of the Korean War, and his experiences overseas in Japan and Korea.

Due to the large attendance at History Night events, all future events will be held in the Memorial Hall in Chester at 6 p.m. The next History Night on Thursday, July 11, will cover the Gold Rush and the founding of Seneca Township