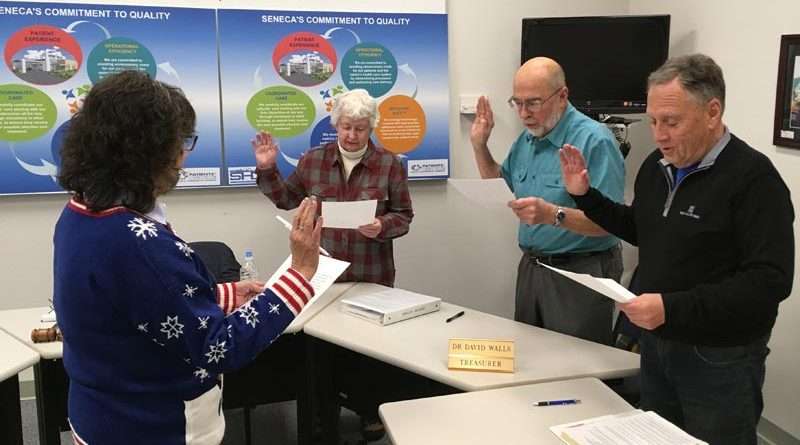 Recently re-elected Seneca Healthcare Board members from left Dana Seandel, Dr. David Walls and Richard Rydell are led in their oath of office by Board Clerk Michaele Hadley (far Left). This moment kicked off the session with a little levity as they tried to stay in unison while reciting the oath. Photo by Gregg Scott
News
January 5, 2019January 2, 2019 Gregg Scott, Staff Writer

One of the first items on the Dec. 21 agenda at the Seneca Healthcare District meeting was to have the three re-elected board members take the oath of office prior to undertaking the duties of their new four-year terms.

As Dana Seandel, Dr. David Walls and Richard Rydell raised their right hands, SHD Board Clerk Michaele Hadley leads them through the SHD oath of office.

Another administrative item on the agenda was to elect new officers for the up-coming year.

The board also reviewed the scheduled meeting dates due to potential conflicts and several date changes were made.

Regularly scheduled meeting are held on the last Thursday of each month at 3 p.m. in the Seneca Conference Room, 130 Brentwood Drive.

The SHD board stresses the importance of public attendance and input to help the hospital achieve its goal of better patient care.

The balance of the session was filled with department reports on the constant changes being made to better serve the community.

During her report, Seneca CEO Linda Wagner noted that during the recent annual inspection process by the California Department of Public Health, the hospital achieved an exemplary final result.