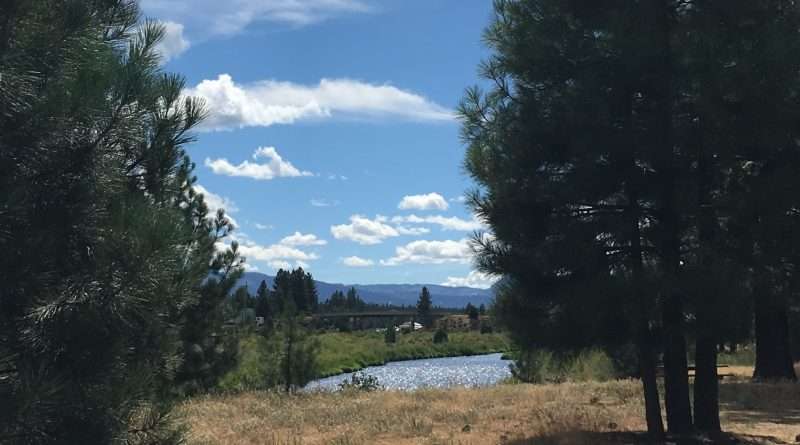 Designer John Houck will be working to show off the breathtaking natural beauty of the Feather River as he designs and polishes the incoming course. Photo by Dee Leekha
News
May 4, 2021May 12, 2021 Editor

If you’re a disc golf enthusiast, you’ll likely be thrilled to know that after some years of tossing the idea around, the Portola City Council has officially approved a plan for an 18-hole world-class tournament disc golf course designed by John Houck near the Riverwalk in Portola.

Evolution of the concept

The Portola City Council initially discussed this topic on the agenda during an update on Jan. 24, 2018.

In 2018, Susan Jacobson of Sport Success, had worked with City Planner Karen Downs on the research and facilitation of a potential disc golf course site meeting and follow up with disc golf course designers to design a championship course along the Riverwalk.

“John Houck, a major name in the disc golf course design arena, sees the course as the number one priority,” Jacobson said at the time. “Pretty much anyone that is a disc golfer knows who Houck is.”

Jacobson asked the council to think about a vision of a thriving city, with the potential of a disc golf course that could potentially attract large competitions and the networks that cover them, such as ESPN and NBC.

Circling back around in 2021

had heard rumblings of the idea about a year before it was initially presented to the city.

Rhode himself played disc golf for the first time with his brother at the disc golf course at the Brewing Lair in Graeagle.

“I ended up getting more and more into the sport, and put a little course in my backyard,” Rhode said. “Susan heard about that and introduced me to John Houck.” Rhode traveled to play some of Houck’s world-renowned courses in Austin, Texas, and as time went on, struck up a friendship with Houck.

It makes sense that a disc golf course would be a great form of recreation for locals in the City of Portola, and the project directly aligns with the city’s  General Plan to encourage growth through recreational tourism as well.

The idea came back to the council Jan. 27, when members decided that the ongoing popularity of the sport gave the project merit for further study.

Council approved the project at a meeting held March 14 at the conclusion of all the meetings, and it was determined that the next steps would be for Tim Rhode and the Portola Disc Golf Club to work with Houck Design, getting hands-on with the course design.

“He has such a big heart for the project and for Portola,” Rhode said. “He’s very excited to bring this course to our community in such a special location near the Riverwalk.”

Those designs will go back to council for final approval before being built, but Rhode and Houck anticipate a course that will serve local players in addition to creating a place for future national and even international tournaments.

As of 2019, California was number two in the country for disc golf courses, with players ranging in age from ages 10 to 50-plus. There were 3,369 professional disc golf association players in the state in 2019, with that number projected to have grown steadily through the pandemic.

“Hosting this course will give Portola an advantage and distinction from all other cities in California to date,” Rhode said.

In speaking to the expertise of the course designer, Rhode said, “John Houck is uniquely positioned in his role as a disc golf designer, as he has been doing business in this industry his entire working life, full time, and has never had any other employment outside of disc golf. We will work closely with the city to make sure we do it right!”

The design of a disc golf course is the most crucial element in the project, according to Rhode, because a course that is not properly designed will create challenges on multiple fronts.

A well-known Houck quote is that “Designing a great disc golf course isn’t something you can do at your desk or at a drawing table. In disc golf, it’s vital to design the course on site, because every tree — and sometimes individual branches — affects the shape of the shot.”

During phase one, Rhode and Houck plan for the first design trip to take seven to 10 days on site. Houck will meet with the city, and design and mark the general areas of the fairways. This is referred to as the “routing” of the fairways and will show the fairway locations.

After the first phase, the project will move on to a second round of tree limbing, brush and dead tree removal. The team anticipates spending somewhere around a week to polish the structure of all 18 fairways and then will start marking the locations for basket and tee positions.

After that is completed, the plan would be for Houck to visit the area a few more times in the interim, with potential installation in August. “I have a grand vision of a grand opening and possibly a tournament in late September of this year,” Rhode explained.

“I’m hoping that we will also have up to 20 local sponsors, but this year is getting things in place and raising awareness to players around the state.”

Rhode is confident that as the site of the newest state-of-the-art HouckDesign course, the city will reap many benefits.

“This is including the quality of residents who will want to relocate, offering the latest in outdoor recreation to the local and regional community, and the financial benefit to the city for many years,” Rhode said. “This course will become one of the historic Houck courses.”

HouckDesign’s lead designer, John Houck, has solo-designed more disc golf courses than anyone working today. The quality of his work is said to set him apart, with many avid disc golf players recognizing his name enough to make an extra effort to visit the many world-class courses he has designed.

According to HouckDesign.com, Houck was chosen by the Professional Disc Golf Association (PDGA) to be head designer at the prestigious international Disc Golf Center in Augusta, Georgia.

After that, at the end of 2017, Houck designed the number one, two, seven, and seventeenth ranked disc golf courses in the world, which is pretty amazing, considering there are over 8,000 courses worldwide, according to player reviews on DGCourseReview.com.

Houck released a statement on his website which said, “I am extremely grateful to all the players who appreciate my designs and travel to go play them. I am humbled by the support and kindness from everyone. I have been working in this industry as far back as I can remember, and it’s been a privilege to not have had any other occupation.”

According to his website, in the next year,  Houck plans to keep innovating designs and has quite a few interesting projects ahead. Houck always acknowledges the support of his wife and business partner Dee through his career, and highlighted in his bio at HouckDesign.com that Dee has been a driving force in paving the path for all disc golf course designers in the industry.

For those that wish to get involved in either the Portola Disc Golf Club or learn more about the course, contact Tim Rhode via email at [email protected]