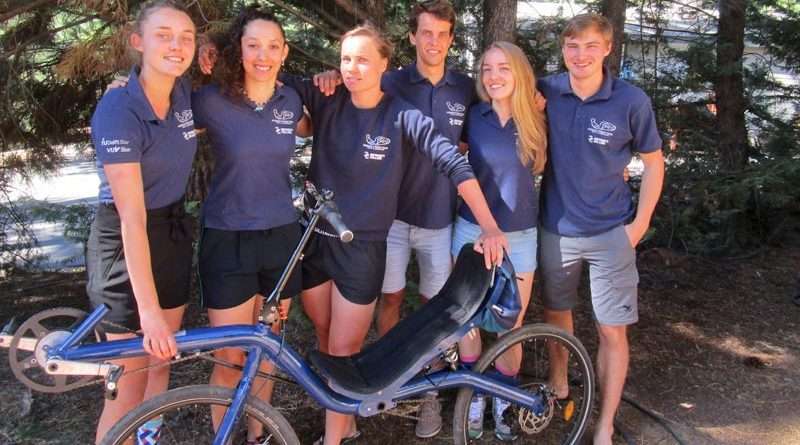 There are quite a number of folks around the Lake Almanor area that remember the Delft/Netherlands University team that competed in the 2018 World Human Powered Speed Challenge in Battle Mountain, Nevada.

That memory is probably because the ladies that competed last year lived and trained for several weeks right here in Lake Almanor/Chester and made numerous friends and followers as a result.

Most will also remember that Jennifer Breet and Lieke de Cock took first and second place in the women’s division in recumbent bicycles and came very close to breaking the world record.

The visiting group was quite taken with our local countryside and residents of the Almanor Basin and as a result they recommended that this year’s team come here as well.

This year’s Dutch team contingent is a little smaller because the highly technical and somewhat fragile cycle was shipped directly to Battle Mountain this year and the tech team went with it, but the athletic team is once again living and training here in Almanor.

One of the most subtle aspects of being here is the elevation. When your homeland is below sea level, competing in Battle Mountain at an elevation of roughly 4,500 feet can present some real challenges.

Tada! Lake Almanor to the rescue! Beautiful mountain scenery with friendly mountain people to encourage them along the way.

The reference to the Dutch team is becausethe Dutch are the peoplewholivein theNetherlands, or those that come from theNetherlands and therefore are often referred to as Dutch in lieu of “Hollanders” or “Nederlanders.”

This year’s athletic team is completing their physical training in the Lake Almanor area and their recumbent bicycle work in Indian Valley.

Linda Vermeulen is in charge of the overall process of selection and training of the athletes as well as doing analytic research.

The athletes are Rosa Bas and Jennifer Breet, who was chosen to compete for a second year.

Emma van Dijk is the training coach and responsible for race instructions for Breet and Jan-Douwe Seigers is her counterpart for Bas.

All of these young people have at least one university degree in varying areas, some of which are directly related to human power science.

The team was quick to point out that there have been improvements on this year’s bicycle as well. Some subtle, but most obvious is that the front wheel size has been increased which means the gear ratios and exterior shape of the shell has also been changed.

All the technical modifications as well as training techniques are to accomplish the group’s ultimate goal of again winning the competition as well as setting a new world record.

Lake Almanor extends good luck wishes to our friends from the Netherlands.