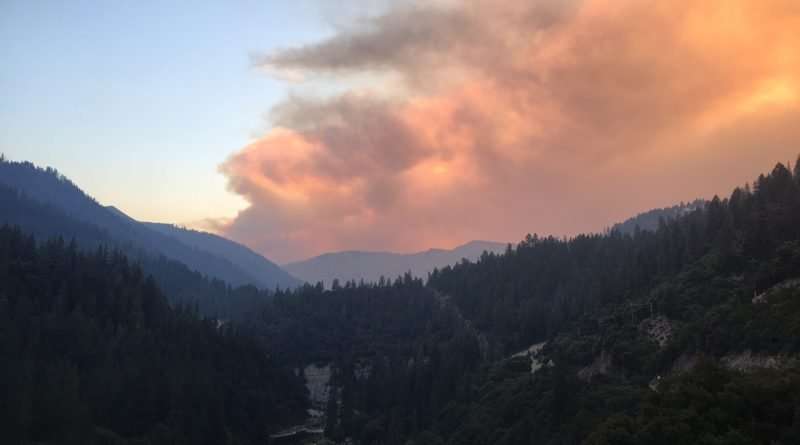 Despite the heavy smoke that was visible throughout the day, the Dixie Fire grew less than 1,000 acres since this morning. It is now 8,754 acres and 9 percent contained.

Cal Fire presented a briefing tonight that aired live on the Cal Fire Butte Co Facebook page. It was less than 12 minutes in length, but provided some important information for the fire that is pushing its way up the Feather River Canyon.

A Cal Fire Incident Management Team (IMT) 1 has assumed command of the Dixie Fire. Cal Fire IMTs are comprised of specialists who take over managing a large fire at the request of the local unit when an incident becomes too large or complex for the local staff.

In addition to the arrival of the incident management team, the fire is now under unified command with the U.S. Forest Service, as the fire spans both state and federal jurisdictions.

Incident Commander Nick Truax, while addressing the arrival of the new team, acknowledged the work that had been done locally. “Everyone out there should be really proud of our local firefighters.”

The arrival of an incident management team usually signifies that the fire won’t be of a short duration. “We got a long fight ahead of us,” Truax acknowledged. “Most of the effort (thus far) has been to protect the communities west of the fire.”

Operations Section Chief Sean Norman presented a rundown of the fire, as he did during a briefing this morning. He described the wind pattern in the canyon that pushes the fire up the canyon during the day, and then pushes it back at night, which helps determine how firefighters attack the fire.

As Truax noted, the bulk of the effort has been focused on protecting the communities to the south and west of the fire, which include Concow, Magalia, Sterling City and Paradise.

“We were successful in getting that door closed,” Norman said as he pointed to the southwestern portion of the fire. “We worked on it all day.” Firefighters received a lot of help from the helicopters that have been very effective as they can quickly refill out of the Feather River. Crews also were able to improve the depth of the fire line.

Norman addressed Division Mike, which proceeds up the west side of the fire, and said it showed very little activity and no need for aircraft. Crews were able to add hose line in the area today.

Farther north in Division Papa, the fire made a run late in the day. Aircraft put down a lot of retardant in this area ahead crews constructing dozer lines. Aircraft and ground crews are working north and east of the fire to try and cut it off. The effort was helped along by handline that was put in for last year’s North Complex Fire.

However beyond that point, Norman said the fire is burning unchecked and crews are contending with an area that has a lot of granite that makes it difficult for crews to move around. (This point in the fire is a three-hour drive back to Chico.)

The very visible smoke column that rises during the day results from the fire running through drainage with heavy timber. The area has seen numerous fires in the past 20 years, so the fire is burning through a lot of brush with dead and downed timber.

Norman reported that the fire has slopped slightly over the Tobin Ridge, which is visible from Highway 70, but it is moving slowly.

Norman said that in working with the railroad, firefighters were able to save the trestle at Rock Creek. The fire, in the area called Division Alpha, which is on the southeast side, has backed down to the river, but again very rapid turnarounds with the helicopters have helped keep the fire in check there.

Looking ahead, lightning is predicted Sunday and Monday, which can do a couple things – bring new fire starts, as well create dangerous winds for the Dixie Fire

The arrival of the incident management team also means that there is the ability to more easily share fire information because there is more personnel to do it. Another fire briefing will be held Saturday evening, also at 7 p.m., on the CalFire Butte Co. Facebook page.