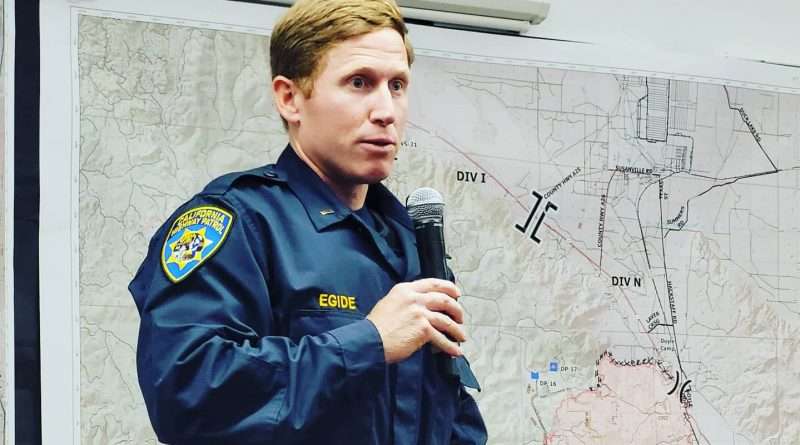 California Highway Patrol Lieutenant Eric Egide said the increased CHP presence in the Quincy area is to be ready in the event mandatory evacuations are ordered. In this photo from July 16, just a little more than a week ago, he reports on the Beckwourth Complex and reviews road closure information. File photo by Lauren Westmoreland
News
July 24, 2021July 24, 2021 Editor

Couldn’t help but notice an increase in the CHP presence in East Quincy and the Massack Rest area this morning, so Plumas News called Lt. Erik Egide, of the Quincy CHP office, to inquire.

“We just want to be in a real state of readiness as the fire creeps closer to the populated areas, ” Egide said.

The Fly Fire poses the most immediate threat to Quincy, but as of this morning, July 24, the fire is not moving toward Quincy thankfully. However, the CHP is in close contact with fire officials, and know that the situation could dramatically change. Case in point, just 48 hours ago, there wasn’t a Fly Fire.

Officers from throughout the North State have joined the local force to provide roadblock and evacuation assistance. Egide said that they will be in Plumas County to assist for as long as they are needed.

“We need a total state of readiness,” he reiterated.

Plumas County Sheriff Todd Johns echoed Egide’s explanation. “It’s all precautionary,” he said. “We have a lot of law enforcement resources in the county right now.”

Egide and Johns, as well as their staffs, have been working fire since June 30 with the outbreak of the Dotta Fire, which became part of the Beckwourth Complex, along with the Sugar Fire. Their resources have been stretched thin, literally covering fire from one end of the county to the other. Both have called on mutual aid from throughout the state for assistance.

UPDATED: After this was originally posted, the Quincy office of the CHP shared the following message on its Facebook page:

Living in the mountains, we all have at least thought about an evacuation plan once or twice. However, have you thought about what you will do when your route, communications, visibility are all cut off.
1) The route you intended on using may be closed, blocked by debris or completely blocked with other evacuees.
2) Go ahead and assume that communications with emergency services and your loved ones will be non-existent. Especially since so many of us rely on only cell phones.
3) If you can’t see, you can’t flee. During the Camp Fire, day suddenly became night and then the smoke reduced visibility to zero. In the these conditions, the evacuation routes are immediately clogged with panicked drivers and no one is going anywhere.
Long story short, please mentally, physically and emotionally prepare yourself. If the time comes for a mandatory evacuation, help you and your neighbors by getting out early, and keep moving. The #DixieFire has a great potential for harm and emergency resources need the entry & exit routes clear.