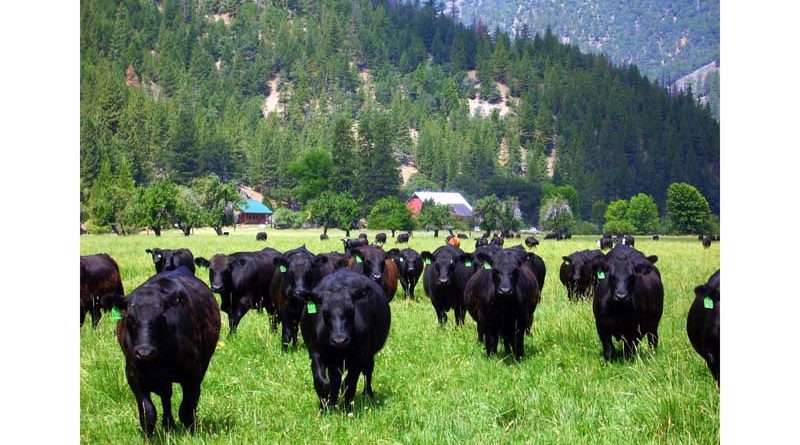 According to local ranchers, the presence of wolves in the Taylorsville and Genesee areas is causing them concern about what that means for their livestock. Photo by Heather Kingdon
News
January 26, 2018 Maggie Wells, Staff Writer

On a quiet Friday night at the Taylorsville Rock and Gem Mineral Museum, the talk was anything but quiet. Fifty to 60 residents showed up Jan. 12 concerned about the ongoing sightings and presence of wolves in Indian Valley. Latest sightings find members of the pack as nearby as Arlington Road.

Most in attendance were local cattle, goat and sheep producers, though there were several ranchers present from Chico, Oroville and Susanville, as well.

The keynote speaker, Kent Laudon, a wolf biologist with the California Department of Fish and Wildlife Services, spoke of his role in monitoring the Lassen Wolf Pack very closely — the pack sighted in Indian Valley.

The pack is currently moving back and forth between Lassen and Plumas counties and enters Plumas through the North Arm, Taylorsville and Genesee areas. Those that have seen the pack, cite that there are now five wolves in the pack with  an additional one who follows them around.

Laudon’s talk described the feeding habits of wolves. Typically, a single wolf will eat 20 deer per year (compared to mountain lions, which eat double the amount).

The Lassen Wolf Pack (the female is collared and tracked throughout the season) has been frequently sighted and heard howling in both counties. Last summer and fall, the pack was confirmed to have one kill of cattle and two probable kills in the Westwood area.

The serious and grave concern among much of the audience — mostly livestock producers — is the lack of  “natural” food for the wolves to feed on which leaves cattle and other livestock exposed and vulnerable.

Normally, the  wolves would be going after elk and deer herds, but the California Wolf Plan states that elk herds are not well established in the area,

and an increase in the number of mountain lions in the area has diminished deer herds (as has an increase in bear and disease). Seven collared lions currently call the Genesee area home.

There was also a tapeworm concern as the wolves can carry a worm that can be transmitted to humans, livestock, deer and dogs with eggs that can be airborne. Though regular medication could treat it, exposure and development of cysts in the lungs, liver or brain could be fatal.

Laudon’s persuasive arguments may have fallen on deaf ears.  The majority of the audience did not agree with his perspective of the wolves and humans being able to live side by side. Dave Daley, California Cattlemen’s president, raised the concern that the wolf is a very big deal and a huge concern.

From the rancher perspective, the wolf menace comes at a time when they are already worrying about regulations, water rights, loss of pastures and other predators, and view the wolf as one more “drain on our businesses.”

Aside from the loss due to kills, ranchers are also concerned of the stress to their livestock once wolves have made their presence known, which manifests in lack of conception and weight gain.

Several ranchers have already implemented the recommendations put out by the CDFWS in their wolf plan to help keep wolves from being attracted to their areas.

They have put up flagry fencing — consisting of lines of fencing with orange cloth flags to scare off wolves. They’ve installed flashing lights on their properties, which seems to have been the most successful way to annoy a wolf.

Some ranchers rely on guard dogs as well, but noted that if there are more wolves than guard dogs the point is quickly moot.

Ranchers are also concerned about mention in the state’s wolf plan of  “corridors” for endangered species. If wolves use a property as a pathway, can that property then no longer be used by the property owner?

A goat producer at the meeting questioned the California Wolf Plan and raised the question of reported numbers of breeding pairs in California — wondering if Tier 2 of the plan would now be implemented. Tier 2 consists of the ability to kill a wolf on private property should the wolf endanger humans or property, including livestock. This would give the ranchers some semblance of control over what happens on their property. Laudon indicated that that part of the California Wolf Plan would not be followed and that wolves were not to be lethally removed.

The response elicited more questions regarding the rationale behind whether or not ranchers should follow a plan not being followed by the CDFWS. It did not garner a reply.

Audience members left the meeting disheartened at their helplessness to protect their livestock.

Among those in attendance were Plumas County Supervisor Kevin Goss, local veterinarian Doyle Rolston and several employees from both the USDA and CDFWS. Tracy Schohr set up the meeting.

Anyone who sees a wolf in Indian Valley can report the sighting to the California Department of Fish and Wildlife, 225-2300. To report a dead or injured wolf, call the U.S. Fish and Wildlife Service at (916) 414-6660.