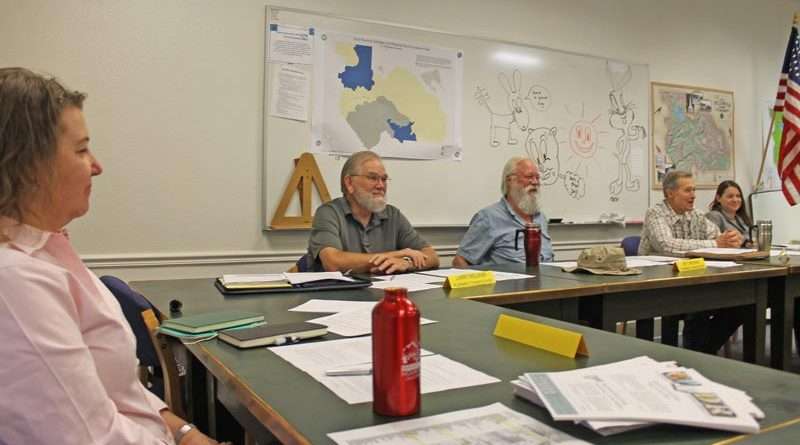 A workshop determining the minutiae of the wording for industrial hemp codes brought out the best and some of the worst in members of the Plumas County Planning Commission on Thursday, Aug. 15.

At times shared laughter resounded throughout the room, at other times commissioners picked on one another as Plumas County Planning Director Tracey Ferguson and Assistant Planning Director Becky Herrin attempted to steer them through language obstacles.

Industrial hemp growers Dave and Jane Roberti, Sierra Valley ranchers, helped give commissioners perspective on not just growing the crop but what kind of processing and/or manufacturing could take place.

Christi Goodman, the owner of a Lake Davis campground, brought commissioners around to reconsidering industrial hemp as a horticultural crop and not just in agriculture domains.

Goodman brought up her objections to eliminating horticulture as a growing consideration at the Aug. 1 meeting. While Goodman touched on research at that first meeting, she was more thorough Aug. 15 in describing what she meant. Goodman also included making lip-glosses, tinctures and lotions with industrial hemp in her explanation.

After nearly two hours of discussion Ferguson recommended that another workshop was needed before a public hearing could be held for industrial hemp code wording finalization.

Industrial hemp is in the cannabis family and so are marijuana, hops and some other plants. What the Roberti family is tired of hearing is from people who don’t understand there is a difference, especially between industrial hemp and cannabis. They are growing industrial hemp not marijuana — they generally have different uses especially where the Robertis and other local growers are concerned. And they have come out in support of the Plumas County Board of Supervisors’ determination against growing marijuana except for the six legal plants allowed by the state.

“What is the federal term?” asked Commissioner Jeff Greening.

Ferguson supplied handouts on how five other relatively close counties have managed terminology with the terms processing and manufacturing.

These counties include Glenn, Butte, Sutter, Yolo and Placer. “Becky and I were very impressed” with Sutter County’s code, Ferguson said.

Sutter County is the only one of the five that appears to single out each term. Four of the other focus on processing as what might occur legitimately on agriculture land.

Sutter County has included the definitions for both processing and agriculture in their county codes.

“There are different ways to interpret this,” Ferguson said about the terminology. “Yolo lumps both together. We’re trying to separate those two.”

But while struggling to determine what is and isn’t considered acceptable manufacturing, Ferguson said commissioners could determine to leave manufacturing out of the code for acceptable practices on land growing industrial hemp.

Processing could include what is done to industrial hemp grown or produced on a property zoned agricultural or industrial. It could include what is processed on site and what is sold on site, Ferguson said. “They might process it and package it to sell somewhere else,” Ferguson said about whether the grower would choose to use his or her own land or would do it on another parcel.

“There is no processing whether it’s cattle or cubed hay going out,” said Dave Roberti. “I can’t afford to put in a processing plant for the amount I’m growing.”

The Robertis’ neighbor, Kevin McInerney, will have a processing operation and they can use that one.

While a small processing plant on someone’s agricultural land is acceptable to Dave Roberti, he said he “doesn’t necessarily want a big mammoth company coming in to produce everything in California.

While commissioners hadn’t fully come to terms with what they wanted to see happening on agricultural land concerning processing and manufacturing, Herrin introduced special use permits and site development review applications.

Currently under the Plumas County code in Section 9.2, “The purpose of special use permits is to permit and control uses which have the potential to be socially, economically, or environmentally incompatible with the surrounding area.”Special use permits are a little more complicated than a site development review, it was explained.

Ferguson said that a site development review is given to her to make a determination of whether to approve it. This process could include an environmental review and/or an investigation, but the planning director makes those determinations.

While the planning director is involved in determining the acceptability of a special use permit, it also involves hearings with the zoning administrator and involves public hearings.

John Olofson asked when California Environmental Quality Act (CEQA) guidelines are considered. Herrin responded that CEQA is considered in practically every function that planning does.

Olofson then said he was concerned about Plumas County’s Euclidean zoning plan. He said that it’s his understanding that under a Euclidean plan, if it isn’t mentioned it isn’t allowed. “We’re almost guaranteed to make a mistake if we continue to make lists,” he said.

“Just take hemp four years ago and we wouldn’t even be having this conversation,” Greening said.

Following further discussions concerning which permit might be required, Olofson said, “I think we need to go into this with our eyes wide open. If you’re processing then you’re flirting with a CEQA review.”

It was agreed that it was essential to develop a process that let potential applicants know up front what to expect.

Referring to a remark Greening made earlier about General Motors moving in to establish a factory for creating some new hemp harvesting equipment one of the growers designed, Commissioner Moorea Hoffman Stout said that GM wouldn’t get through this permit processing.

Greening responded that the process couldn’t be allowed to become too burdensome. “I never had a use permit on any of my ranches,” he said. “But things have changed.”

It wasn’t long after this that Olofson got a little heated with Greening. He “doesn’t seem to understand that I understand something about farming and ranching somewhat,” he said.

“I’m not saying build a building without permits,” or install utilities without the proper permits, Greening said. “You stand corrected on that.”

As discussions continued, Herrin reminded commissioners that Environmental Health Director Jerry Sipe wants to be included on plans and permits.

He “wants a discretionary level of review,” she said.

Herrin said that inclusion is relatively simple. An application is sent to him and he’s asked to study it and determine if he has concerns.

“We have a ton of stuff on a farming operation that’s a risk,” Greening said about all of the chemicals and herbicides that a farming or ranching job could require. “Then the agriculture department gets involved,” he added. “They’re as much an ally as they are a regulatory.”

Earlier in the meeting, Commissioner Larry Williams in considering Goodman’s comments said that he didn’t want to see the new code language exclude small interests and coops. “I just don’t want to limit smaller growers who are only trying to succeed,” he explained.

At length, Ferguson said she thought another workshop is essential.

A special meeting is set for Thursday, Aug. 29, at 10 a.m., in the Planning Department’s meeting room in Quincy.