Our loving mother, Irene Rose Wood (Shields, Moser), passed away in the early morning of November 23, 2022 in her Portola home of fifty-two years at the age of 87. 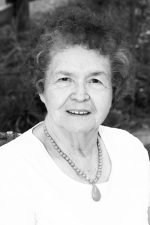 She is survived by five of her seven children: Sheri Shields of Las Vegas, Nevada; Frank (Joanne) Shields of Rocklin, CA; Jonathan Shields of Reno, Nevada; Mimi Moser of Portola, CA;  Monte Moser (Randi) of Brentwood, California, as well as thirteen grandchildren and thirty great grandchildren.  In addition, she is survived by five of her six brothers and their families:  Ernie Wood (Doyle, CA), Marty Wood (Reno, NV), Earl Wood (Eagle Point, OR), Stanley Wood (Las Vegas, NV), and William Wood (Reno, NV), as well as cousins and dear friends.  She was preceded in death by two of her sons, Dee Wayne (1957), and Layne Arthur (1982).

Services have been changed, due to winter storms: now scheduled for Saturday, Dec. 10, 11 a.m., at the Portola Ward of the Church of Jesus Christ of Latter-day Saints. Following the funeral the burial will be at Whispering Pines Cemetery where she will be laid to rest near her husband Leonard Robert Moser, father Martin Christopher Wood, brother Edward John Wood, and son Layne Arthur Shields.

Irene was born on April 13, 1935 to Nina Rose Charley and Martin Christopher Wood in Plumas, Lassen County, CA and attended high school in Susanville. She lived the majority of her life in Lassen and Plumas counties. She was happiest when she was with her family, close and extended, laughing and enjoying one another’s company. She will be dearly missed by all who were blessed to know her.