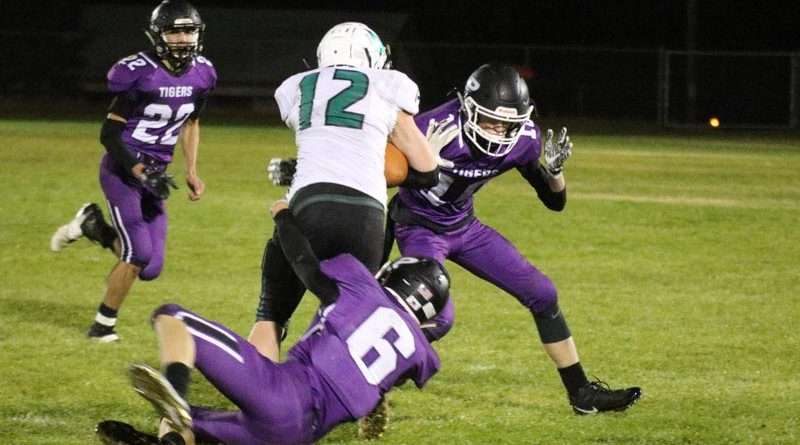 The PHS Tiger football team can boast of an undefeated record in conference and in league. The boys are 4-0 overall and 2-0 in their league. Head football coach Steve Heskett has been working hard to help the Tigers achieve their goals to finish in the top of the Cascade Valley League.

The weather was the best it could possibly be as the game started at 7:30 p.m. on a perfect September evening. The Tigers jumped on the scoreboard in the first quarter with two touchdowns and a single extra point. They repeated the performance with two TDs and an extra point in the second quarter and allowed a TD for the visiting Weed Cougars but no extra points.

Returning after halftime to lead 23-6, the Tigers continued with what worked and added yet another pair of TDs and a single extra point, 39-6. In the final quarter PHS allowed another touchdown for the Cougars, but again no extra point for the final score, 39-6.

Junior Owen Bowling was on the receiving end of two Gonzalves passes for a total gain of 57 yards and scored a touchdown in the process. Senior Oscar Torres also caught two passes for a gain of 48 yards and more importantly, another TD!

The big yardage gains came from rushing with junior Diogo Juarez pushing through for 74 yards and a touchdown scored. Junior Zach Mulhall scored a TD mixed in with his 60 yards rushing and senior Taylor Koski scored a TD in a single 14-yard carry for the Tigers.

Senior Irving Juarez averaged 35 yards each for his six kickoffs, a total of 212 yards. Junior Shane Curren had a 32-yard punt. Koski carried back two kickoff returns for a total of 75 yards and one punt return for 37 yards.

“These young men are playing very unselfish football and getting better every week,” said Heskett.