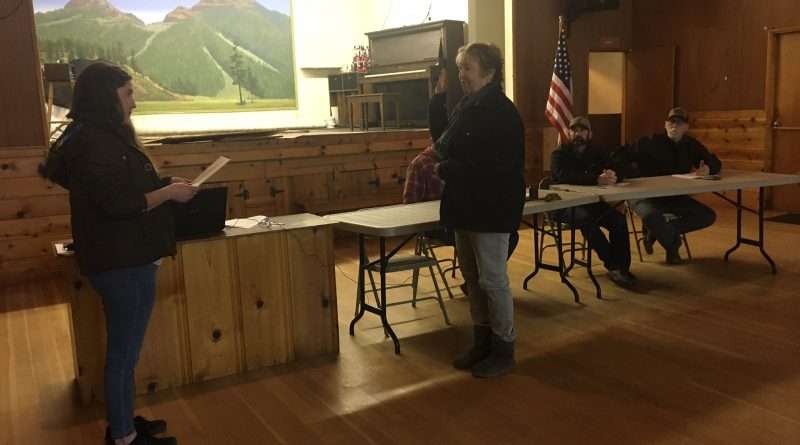 While there was no financial report given in the Jan. 12 meeting of the Indian Valley Community Services District at the Taylorsville Historic Hall (financials being an area of much concern with the CSD customer member district), actions taken at the meeting by the board ensure that the financials might look better in the future.

Board members in attendance were Roger Cherry, Kaley Benz, and chairman and acting fire chief Bob Orange.  The closed session at the front of the meeting yielded the biggest decision of the night: Indian Valley Community Services District joined the PGE lawsuit and will be represented by Potter Handy and Cook. This comes after the findings last week of PGE’s responsibility when a tree fell on a powerline last July. In previous months residents had been wondering why—given the woeful financial straits of the district—the IVCSD had yet to join.

“In [little over a year] we lost four board directors, we’ve had four general managers, and three fire chiefs. We appreciate you coming on board,” said Orange as Gorbet took her seat.

There were five public comments—two coming in over email and read out by office staff and three in person.

The first commenter felt there’d been Brown Act violations and wanted a clearer picture of how money was being spent.

Mike Chelotti made a statement about the tough job the IVCSD is headed for into the rebuild process and spoke of being a retiree who would not be rebuilding his rental property. With a median income of less than $30,000 a year he wasn’t convinced that Greenville would be able to rebuild.

Josie Chelotti exclaimed that while she appreciated the board’s hard work she couldn’t wrap her head around the fee of $6,500 if a homeowner disconnects from the services and later reconnects given there are no services to be had at the moment.

“Why am I paying for services I’m not receiving? I find that unconscionable. A real red flag in my mind,” said Chelotti. IVCSD as of the last meeting, had begun to send out bills for September through December 2021 including threats of late fees. IVCSD customers of burned out properties are currently being charged $78 a month for their lots to be hooked up to the system regardless of the status of their lots being uninhabitable. “Why are you victimizing the victims?” she asked.

Board director Kaley Benz stepped up to address the issue. “At previous meetings we’ve talked about this problem. We are in a very difficult spot. The trick is to keep this entity going. We continue to keep the charge [$78] to charge because it keeps water in the hydrants, etc., and that money is going into a pot to keep this going.”

A murmur of the audience began repeating the tale of there not being water the day of the fire.

“That is a bald face lie,” said general manager Ted Cassidy, “I’m addressing this in a letter this month.”

“There was 20 feet of water in the tank on the morning of the fire. On July 23 we did put lake water into the tanks then. The wells couldn’t keep up and we lost power.”

“We will put something together about this,” said Orange.

Orange continued that the IVCSD met with Senator Brian Dahle a month ago. They asked for appropriations.

“We saw that Paradise got $14.4 million. We are going to be following Paradise’s lead. I have super empathy for everyone who is struggling. But this is what we are trying to do,” said Orange.

“We had insurance and grants but that can’t keep it afloat,” said Benz.

“We had insurance for when we were down but we aren’t down anymore. They [insurance] is helping us with infrastructure,” said Cassidy. Cassidy went on to explain that the high reconnection fee was meant to discourage people from turning off their services so that the $78 could still be collected. If a property is sold then the new owner would have to pay the reconnection fee. This was the main reason, he argued, that the reconnection fee is so high.

“That’s completely manipulative,” said Josie Chelotti who also remarked that at the time of completion of build is when the connection fees for any given property was established. Cassidy returned the argument that those records no longer existed.

“You are aggressively trying to collect on a service that can’t be used. Late fees are being charged. They are unconscionable. You are  adding fuel to an already freaking nightmare fire. You are revictimizing the victims and then asking them to understand. We are doing this completely a**backwards,” said Admire, “Putting the last nail in the coffin. It’s completely unnecessary.”

The first emailed comment reflected the reconnection fee. “You really seem to want our money. Why should we move back?” Questioned the writer.

The second emailed comment reflected the lack of live streamed meetings for community members who can’t get to the meetings and questioned ‘a lack of transparency.’

“I think it’s setting a barrier to rebuilding. Make board meetings available through zoom, in order to maintain trust and confidence. We should have full transparency including contracts (the general manager’s contract), labor, hours worked, decisions. A bone of contention in the community has been manager Cassidy’s contract salary versus the near minimum wage of the IVCSD employees—one position of which the manager has sought to make cuts.

Other decisions made included a new meeting schedule due to the need, particularly since the fire of holding so many special meetings. According to the general manager and echoed by the directors, this has caused a perceived lack of transparency, (special meetings only need 24 hours advanced notice). Staff proposed to have two meetings a month with the understanding that the second one will be canceled if there is no reason to meet. The new approved schedule will be the second and fourth Wednesday of the month at 6:30 p.m. at the Taylorsville Historic Hall.

Chief Operator Don Silva gave a report on various issues around the district needing attention both due to weather and fire aftermath.

Acting fire chief Bob Orange gave a report on fire department. Orange has ordered radios to be installed on engines that have full frequency ranges, citing the problem of not having the same frequency as others responding to the Dixie Fire in August.

“During the fire we didn’t have a single radio using the same frequency as the other people,” said Orange. The plan is to make sure each station in the district has one. They’ve currently been back ordered due to Covid temporary shut downs with manufacturers, (the district ordered 15 portables six months ago).  Orange also stated he’s waiting on used engines from other California cities (San Ramon and Redlands). He’s also is working on a 50/50 grant to get gear paid for in addition.

Orange let the directors and audience know that IVFD is training with Meadow Valley and Quincy volunteer firefighters starting next week.