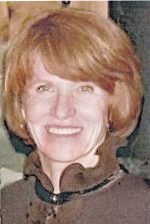 Jackie had many talents. She was athletic, playing basketball in high school. She was a great dancer. Jackie worked in the banking industry and managed branches.

She married the love of her life, Robert, on December 1, 1982, and promptly took up golf. For both Jackie and Robert, it was a second marriage and each brought kids to the family.

When Bob and Jackie moved to Indian Falls in 1993, their home became a haven for their children and grandchildren and for Jackie’s parents too. After Jackie’s mother passed, Jackie’s father, Cal, lived in an apartment over the garage Chris Meyers built until Cal too passed away.

Jackie was beautiful, both inside and out. She was kind, intelligent, had a quick wit, and was graceful. But she was also a strong, bold-hearted woman. When Jackie captained her debate team in high school, her friends gave her the fitting nickname “Passion.” As an adult, she learned to hang glide, took up gardening, learned to play piano, joined a knitting club and learned to ride horseback. But her main passion was for her beloved children, grandchildren and her family.

Her essential character continued to shine even when she suffered a stroke nine years ago. While limited in body, her wit and spark were evident until her final breath.