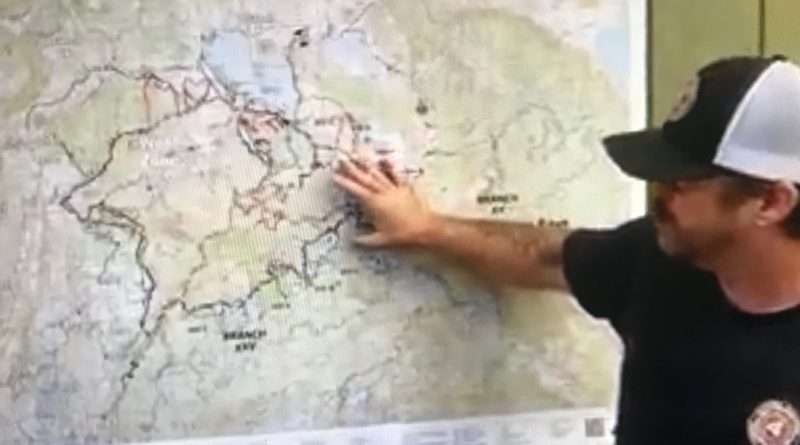 Those who came to rely on Dennis Burns’ informative twice-daily  briefings on the East Zone of the Dixie Fire, should be pleased with his replacement. Beginning this morning, Jake Cagle, who became the face of the North Complex Fire last year for Quincy, Meadow Valley and Cromber area residents, is back. Those who expected to see him during last night’s unified command briefing might have been disappointed, but he will be the one reporting on the East Zone, while Mike Wink continues to provide West Zone updates.

For this fire, Plumas County residents are split into two zones with the Chester/Lake Almanor people falling into the Cal Fire-managed West Zone, and the rest of the county under the management of the East Zone. But though they are divided into two zones, the entities work together sharing resources and coordinating responses especially in the areas where the two zones meet up — such as in the Feather River Canyon.

Turning to the map this morning, Cagle said that everything from Merlin to Bucks Lake is solid, but firefighters aren’t quite “out of the woods in the Silver Lake area,” which is above Meadow Valley. Cagle said once this area is fully addressed and locked off, hopefully in the next couple of days, then mandatory evacuations could be lifted in Meadow Valley.

“Everything moving east is looking good,” Cagle said, as he traced the map above the Quincy area and around to the north. “Up to Taylorsville everything is looking good.”

He reported that up Highway 89 west of Greenville no structures have been lost. “Night resources worked really well,” he said, and was pleased at that work done to lock off Old Hauns Road. However, he said that today is another critical fire weather day. He explained that if conditions become adverse, the plan would be to use Old Hauns Road as a “catcher’s mitt,” which would be critical from keeping the fire from advancing toward Westwood.

As for the area of the fire that is burning into the burn scar of the old Chips Fire near Caribou, he said crews are working on going direct and holding it.

The Evans Fire, also under the jurisdiction of the East Zone,  is 89 acres with 90 percent containment.

Though the Chester/Lake Almanor area is in the West Zone, he said firefighters would be challenged today, just as the East Zone has been with Greenville.

Cagle will provide another briefing tonight.