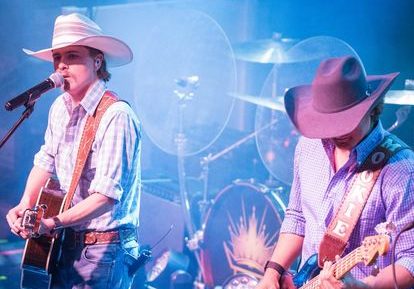 Jake Jacobson performs across the West and just released his latest EP. He will perform at the Plumas Sierra County Fair at 7 p.m. on Saturday, July 31, in the grandstands. Photo submitted
News
July 28, 2022July 31, 2022 Editor

The Plumas Sierra County Fair headliner is a familiar face who first graced the stage as a young boy performing cameos with his dad’s band, the Shooters, in Portola. Now he is performing with his own band and making his fair appearance a stop on a tour that has taken him and his band throughout the West. He will perform in the grandstands on Saturday, July 30, at 7 p.m.

Tickets are $10 and proceeds will benefit the Dixie Fire Collaborative.

At age 25, Jake Jacobson has held many jobs — from working at Eastern Plumas golf courses and doing construction, to selling fencing in Reno and even writing about sports for the four Plumas County newspapers. But now he has found what he wants to do for the rest of his life – compose and perform country western music.

What if that doesn’t work out? “There’s no Plan B,” said Jake.

Jake stopped by the Feather Publishing offices on a recent break in his touring schedule to talk about his career. It was a homecoming of sorts since he once sat at the sports desk in the corner of the newsroom.

The day of our meeting he was releasing his latest single “Speed of Neon Light.” That was to be followed by another single and then an EP in June. His music is available on Amazon, Apple Music, Shazam, Pandora, Spotify, and other music platforms. The platforms provide an opportunity for fans to hear his music, but he’s drawn to the stage.

Yet it was a solo performance posted to Twitter that drew the attention of country singer Randall King and took Jake’s career to a new level. In September 2020 Jake was working at a Reno distillery when he grabbed his guitar during a break and played one of King’s songs and posted it. Less than two hours later King retweeted it. “His management emailed me the next day and invited me to Nashville,” Jake said.

“That moment put him on a catapult ride,” said his mom, Susan Jacobson.

Jake’s parents, Ron and Susan, are his biggest fans and travel to see him perform as often as possible. One recent trip took them to San Diego, where Jake was opening for Randall King. Not only does Jake open for King, he also joins him on stage toward the end of the concert. The first time King invited Jake back on stage he asked him, “Do you know ‘Neon Moon?’” Did he! That was the song that Jake would sing with his dad’s band. Now it’s become part of their repertoire: Jake opens; followed by King’s performance, and then they close out the show together.

When asked if he ever gets nervous performing, Jake shakes his head no. That’s probably because he is used to the stage. In addition to singing with his dad, Jake was an accomplished gymnast who competed from age 5 to 17, during which he won 10 national championships, competed for Team USA, and was a member of the Junior National Team. Through it all, Jacobson always turned to music for a distraction and stress relief.

Now music is no longer just a distraction, it’s his career, and it’s taking off. He credits its growth in large part to Scott Gunter, who is Randall King’s manager, and is now providing artist relations services for Jake, as he does for another country star, Cody Johnson.

When asked recently who he appreciated for helping him get to this point, Jake said that outside of his family, that person was Gunter. He credits Gunter for finding him writing opportunities, songs, shows and introducing him to people who can help his career. “I can honestly say, that without Scott, I would not be the artist that I am today,” he said.

That includes not only touring but releasing music. In addition to his single “Speed of Neon Light,” he released his new EP “Lovin’ and Leavin’” last month. Jake writes his own songs, as well as records those of other writers. Jake isn’t signed to a record label; he is an independent artist which means that he owns his masters. He is paid through a distributor based on the number of times his music is streamed.

Jake said he is constantly learning about the music business and again credits Gunter for helping to guide him through its intricacies. He also looks to Cody Johnson and Randall King to see how they successfully navigated the business. County music is Jake’s passion and what he wants to do in life.

Fair goers will have a chance to see Jake Jacobson perform at the Plumas Sierra County Fair grandstands on Saturday, July 30 at 7 p.m. Tickets are $10 and proceeds will benefit the Dixie Fire Collaborative.