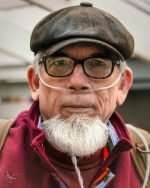 Jim McCLain was born September 17, 1949, in Fort Richardson, Alaska. Being an “Army Brat” he and his family moved from town to town before landing in Greenville, California in 1959. He graduated from Greenville High School in 1967. After graduation, he joined the army and served in the Vietnam war. Upon his return from the war, he attended Feather River College from 1970-1972. His first “real job”, as he called it, was working part-time for McNutt Home Interiors where he found his true calling was flooring. Jim was a master technician and he transformed thousands of houses and businesses with his outstanding quality of work, attention to detail, and creativity. Most of Jim’s adult life was spent in Quincy where he ran his business for almost 30 years before transitioning his talents into online floor forums providing insight and guidance to many in the trade upon his retirement from installations in 2006.

Jim’s creativity extended into his passion for photography. Anyone in Plumas County knew of the incredible pictures taken by Jim throughout the county he loved. You might recognize several of the pictures proudly displayed on the side of Sav-Mor Foods as Jim’s handiwork or from the many awards he received at the county fair. Throughout the years, locals would recognize Jim out in the community either on his Segway, which he loved dearly, or in his Jeep. Both of which he used to get outside and document the beauty in parts of Plumas County that were off the beaten path. Most recently, you could see Jim zipping around Quincy on his bright yellow Vespa scooter which he lovingly referred to as “Red” in a nod both to his father and a previous girlfriend.

One of Jim’s proudest accomplishments was his sobriety. On April 18, 1985, Jim made the decision to become sober after a significant addiction to alcohol and drugs. For over 35 years, Jim shared his story of addiction with others — attributing the sharing of his experiences as a way to enjoy the “good life” he was living and to maintain his sobriety. In 2005, Jim was diagnosed with severe Emphysema and the doctors told him he probably only had 2 to 3 years left to live. In true Jim fashion, he was bent to prove that doctor wrong, spending the next 16 years with an oxygen tank on his back or by his side. He shared his stories of sobriety, his passion for photography, and his struggle with COPD publicly on one of his many blogs — his most recent being “Jim’s 1 Foot in the Grave (The other foot ain’t ready yet!)” which you can still visit if you would like to read some of his stories or check out his photography.

After a short battle with a respiratory infection, apparently the other foot was ready and Jim passed peacefully in his sleep at approximately 2:30 am on February 27, 2021, at Saint Mary’s Hospital in Reno, Nevada. He was 71 years old.

He will be missed dearly by many Plumas County residents.