After a hard-fought battle with cancer, James “Jim” Russell Erle of Calpine, CA, passed away at the age of 78 on November 26, 2022, at home with loved ones. 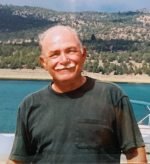 Born and raised in New Jersey, Jim took to the seas as a young man serving in the US Navy’s engine room on the destroyer USS Epperson, a job he said he loved. After serving in the Navy, Jim moved to California. And although he lived in various states over the years, he called California home for most of his life. He took up residence across the state including the coast where he would free dive for abalone, the San Joaquin Valley where he taught his kids to love and raise animals, and finally the Sierra Nevada mountains; a place he loved. While living in all these locales, Jim owned and operated semi-trucks, hauling various cargo intrastate and interstate. After settling in the Sierras in the late 1980s, Jim worked winters for CalTrans plowing snow. After selling his last truck in 2003, Jim worked full-time for CalTrans, retiring in 2017 as Supervisor of CalTrans Maintenance Station in Sierraville.

Jim was a heavy equipment operator, mechanic, fabricator and avid reader. Upon retirement at age 73 he decided to take up racing. He and friends built a hobby stock car and Jim raced it locally for a few years. An engineer at heart and mind, Jim would always look for ways to modify things to make them better. He usually succeeded in this task as “can’t” was not in his vocabulary. Jim will be remembered for his love of his family, friends and his savior Jesus.

Services will be held on Saturday, January 7th at the Graeagle Community Church at 1:00.