Janet Carol (Sweeney) Hancock passed away peacefully at age 85 on December 19, 2022, surrounded by her loving family after a brief illness. 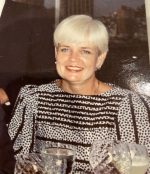 Janet was born on September 15, 1937, in Flint Michigan to Bernard and Edna Sweeney and spent much of her childhood in St Louis. She attended DePauw University where she earned a Bachelor of Arts degree in English Literature. It was also at DePauw that Janet met her husband of 63 years, John.

Janet and her family lived in New Jersey for many years before settling in Portola Valley, CA where she was an active alumni member for Pi Beta Phi and played key parts in setting up the sorority at Stanford University. She also worked and mentored many students at Canada College up to her retirement in 2002. In retirement, Janet and John moved to Lake Almanor, CA and later Chester, CA. Janet enjoyed golf, a good card game and time with family and friends. She cherished her grandchildren who brought incredible happiness into her life.

Janet will be truly missed and never forgotten by those who loved her.

In lieu of flowers, memorial donations are requested to be sent to the National Kidney Foundation.

A Celebration of Life is to be determined.