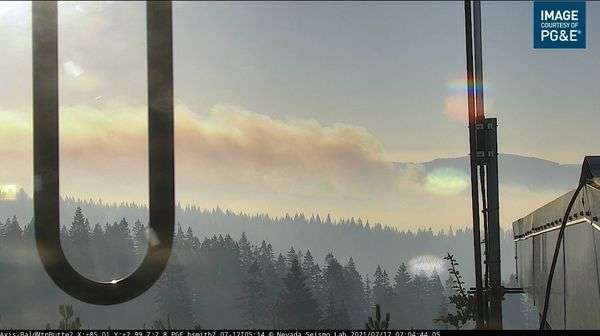 Smoke is visible from the Dixie Fire throughout the north state and has plagued the Lake Almanor Basin in recent days. Photo courtesy of Cal Fire
News
July 17, 2021July 17, 2021 Editor

UPDATE 1:55 p.m.: The  Dixie Fire is currently producing a large amount of smoke within the perimeter and blowing into the communities to the north. Their have not been any significant fire runs outside of the control lines today. Firefighters are working on the entire perimeter of the fire establishing control lines.

The Dixie Fire grew another 1,100 acres overnight and is now 9,847 acres. There was also a slight uptick in containment and it’s now 9 percent contained.

As reported last night, a Cal Fire Incident Management Team (IMT) 1 has assumed command of the Dixie Fire. Cal Fire IMTs are comprised of specialists who take over managing a large fire at the request of the local unit when an incident becomes too large or complex for the local staff.

In addition to the arrival of the incident management team, the fire is now under unified command with the U.S. Forest Service, as the fire spans both state and federal jurisdictions. This morning the Plumas National Forest announced that its forest is closed in the vicinity of Dixie Fire.

According to this morning’s incident report, the fire is continuing to burn in a remote area with limited access, which makes containment difficult. The good news is that the firefighters have made great progress on the areas of the fire that most directly threaten communities.

Looking ahead, weather conditions are going to continue to test firefighters with warming temperatures and northeast winds developing overnight. This will push the fire down canyon. Scattered thunderstorms are expected to begin Sunday night into Monday morning which can bring more fire starts and erratic winds.

The fire began July 13 at 5:15 p.m.; the cause remains under investigation.

Last night Incident Commander Nick Truax acknowledged the work that has been done thus far by fire crews.  “Everyone out there should be really proud of our local firefighters,” he said, but added that “We got a long fight ahead of us.”

There are now 1,284 personnel assigned to the fire, with 16 water tenders, 10 helicopters, 50 hand crews, 17 dozers and air tankers. The helicopters have played an integral part of the fire fight as they can quickly fill in the Feather River and access terrain difficult for firefighters to reach.