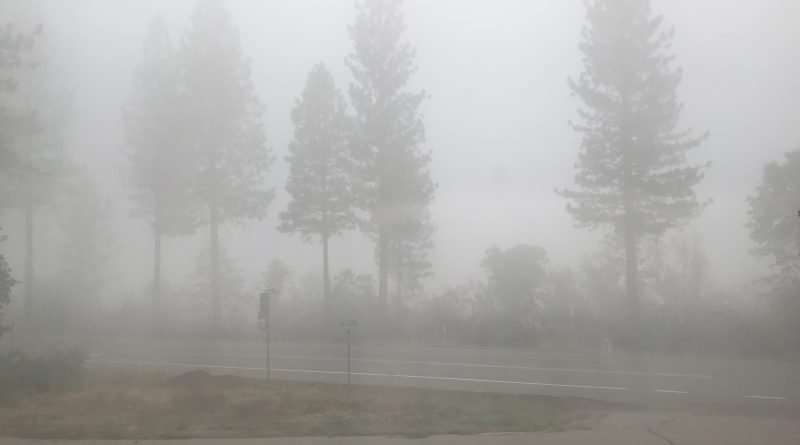 The view in Quincy this morning at 7:15 a.m. on July 28. Heavy smoke settling in the valleys was predicted and it came to fruition. The Air Quality Index pegs Quincy at 500 and hazardous. Photo by Debra Moore
News
July 28, 2021July 29, 2021 Editor

It was predicted that the valleys in the Dixie Fire area would be socked in with a heavy blanket of smoke overnight, and those predictions were correct. On a purely subjective basis, today’s air quality in the Quincy/American Valley area is the worst that it has been. According to the Air Quality Index, it’s hazardous out there. The smoke blanket helps blunt the fire’s spread, but it prevents any air attack.

As of this morning, the fire is reported to be 217,58 1 acres and 23 percent contained. There are known to be 35 structures and 19 outbuildings destroyed, with 10,721 remaining threatened.

Following is the latest information on the fire:

There was minimal fire activity overnight on the DixieFire.  Higher relative humidity stalled firing operations. The fire is burning in a remote area with limited access. Extended travel times and steep terrain are hampering control efforts. Light rainfall fell over portions of the fire area at Humbug Summit. A decrease in clouds through the remainder of the afternoon and evening will lead to rapid drying despite recent precipitation. Crews will continue to construct and reinforce fire line to secure the fire perimeter in both zones and provide structure defense in communities at risk.

Dense smoke settled into pockets in and around the fire last night. Isolated storms and gusts overnight were forecasted for the area. Crews worked throughout the night and strategized using firing operations to their advantage to expand and secure containment lines.

Firefighters worked on the key containment lines from the Bucks Lake area to the north of Snake Lake, using dozers, tactical firing operations, and mop up to improve containment efforts. Crews along Mount Hough Road planned to use tactile firing operations to decrease the threat to Quincy and Chandler Road. Work continued along the north perimeter, including the line along Emigrant Road as conditions allowed. Firing operations burned bright and may have been visible in nearby communities overnight. Hot, dry conditions are expected today and through the week.

Fire behaviorists predict robust fire activity day and night this week, based on expected weather and fuel conditions. When the sky is clear and visibility increases, air operations will aid firefighter efforts.